"Imitation of Life" and the Self-Fulfilling Pity Prophecy

"I feel sorry for the children."

Why? I would ask.

"Because they won't be accepted by whites or blacks." 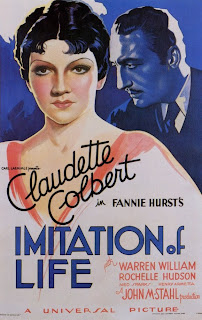 Then why can't we change that? I would wonder. But it didn't seem like something my parents wanted to go into. And truthfully, the conversation didn't come up very often. But I watch a movie like "Imitation of Life" today -- either the 1934 or 1959 version -- and I remember that frustratingly circular piece of ill-logic: Nothing can be done because nothing can be done.

Fannie Hurst wrote "Imitation of Life" after taking a trip or two with African-American writer Zora Neale Hurston, who briefly worked as Hurst's secretary, and one assumes that what Hurst saw on those trips, as well as their relationship, influenced her writing. Racism still exists in America to a frightening degree in 2013, so one can only imagine what it was like to travel as an educated African-American woman seventy years ago.

To audiences, "Imitation of Life" can be polarizing. Is the story a soapy, oversimplified look at race, played out by a cardboard Betty Crocker and Aunt Jemima? Or is it a heartbreaking story of mother love and misplaced pride?

The story still fascinates people. I've written a syndicated TV and movie newspaper column for decades, and for years the movie I got the most questions about was "Imitation of Life," mostly from women who saw the 1959 version as teenagers and who still had vivid memories of it.

Personally, I think watching the 1959 version of "Imitation of Life" is like drowning in satin. Ross Hunter's production is ultra-plush, all Technicolor and CinemaScope and Lana Turner's wardrobe. The movie certainly has its fans, and if you are one of them you will want to check out "Born to Be Hurt" by Sam Staggs. It's a history of/meditation on "Imitation of Life" that features slightly fawning interviews with cast and crew of the 1959 film, including Juanita Moore and Susan Kohner. One critic calls it "gloriously digressive," and it is that, no doubt.

Although neither film is totally faithful to Hurst's book, the 1934 film seems to come closer, and it's the one I prefer.

We open in the home of Bea Pullman (Claudette Colbert), a struggling widow who's juggling single motherhood with selling maple syrup door to door. 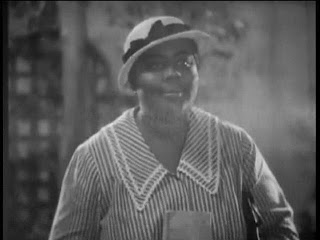 The paths of Bea and Delilah Johnson (Louise Beavers) cross when Delilah and her daughter Peola come to the house by mistake. We first see Delilah through a barrier -- Bea's screen door.

But she and Bea connect, and Delilah is so desperate for a job that she talks Bea into to hiring her in exchange for only room and board for her and her daughter. Peola and Bea's daughter Jessie become friends and Bea's household worries are solved.

When the two girls start to school, Peola's life choice becomes heartbreakingly clear-cut -- pass as white by denying your mother and your heritage, or live a life as someone who is Lesser.

The fortunes of Bea and Delilah change when Bea combines the syrup she sells with Delilah's unique pancake recipe. They open a restaurant on the boardwalk, and it's successful, but customer Elmer Smith (Ned Sparks! Yay!) gives Bea a million-dollar idea -- package the pancake mix and sell it in stores. 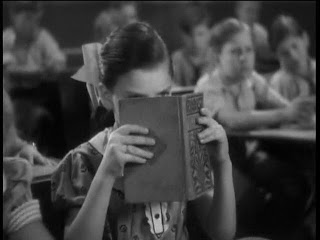 The same day, during a rainstorm, Delilah takes a raincoat and galoshes to Peola at school. The teacher looks at Delilah quizzically as she asks to see her daughter and Peola hides behind a book. Then a murmur goes through the classroom -- Peola is black! Delilah approaches the teacher and says a line filled with double meaning.

Delilah: Teacher, has she been passing?


Delilah runs home in tears, and tells her mother, "I don't want to be black! I don't want to be black!" But Delilah chooses to accept society's verdict even if Peola doesn't. And that shapes her vision of what kind of life Peola will have. For instance, when Bea and Delilah fantasize about making a fortune, each of them have very different dreams for their children:

Bea: I could send Jessie away to college.

Delilah: And Peola -- she wouldn't have to do housework for nobody.

Elmer becomes the company's business manager. Delilah is given a 20 percent share of the company, and she quickly becomes very well off. But she won't leave Bea and Jessie. When Delilah builds a Manhattan mansion, Delilah lives in very nice downstairs quarters -- but when there's a party upstairs, it's kind of an unspoken rule that she and Peola aren't invited. But hey! They can stand outside and listen to the music. ("That orchestra's pretty good for a bunch of white boys," Delilah says.)

Bea's daughter Jessie (played as a young adult by Rochelle Hudson) attends an exclusive school and lives a life of parties and rich beaus. How much must it kill Peola (played as an adult by Fredi Washington) to see Jessie, someone whose privileges she could also have except for the fact that her mother is black? 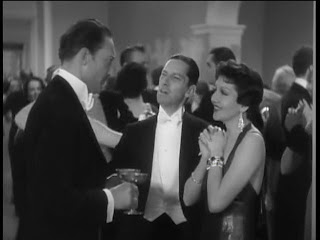 Around this time, there's a much less interesting plot element -- the romance between Bea and ichthyologist Stephen Archer (Warren William). There's a lot of labored humor about what an ichthyologist is -- including much laughter at Delilah as she struggles with the term. Then Jessie gets a crush on Stephen. Bea doesn't want to hurt the mother-daughter relationship, so she and Stephen part -- temporarily, at least. But compared to the story of Delilah and Peola it's pretty weak tea.

To please her mother, Peola attends an African-American college in Virginia, but when she drops out and runs away to work in a restaurant where she can pass as white, Bea and Delilah "rescue" her and bring her home.

Peola: I want to be white, like I look.

Peola: Look at me. Am I not white? Isn't that a white girl?

Delilah tells her it's the Lord's work -- "He made you black, honey. Don't be tellin' him his business. Accept it. Do that for your mammy."

But Peola leaves for good, with instructions to her mother to ignore her if she sees her on the street. Delilah's health declines, and on her deathbed she asks to see a framed photo of her daughter. Then she says another nice line of dialogue bursting with double meaning:

Delilah (looking at photo): They never done her justice.


Then Delilah gets her only wish -- an elaborate, ornate funeral.

Delilah becomes a kind of Servant Emeritus to Bea, still talking dialect, calling her "Miss Bea" and offering to rub her feet after a hard day even though they're wealthy business partners. But through her devotion to and heartbreak over Peola, Delilah remains easily the most well-rounded role Louise Beavers ever played. Delilah still has her stereotyped side, but you can't help but remember the line attributed to African-American actress Hattie McDaniel: "I'd rather play a maid than be one."

As I watch "Imitation of Life" 70 years after its initial release, it still has the power to infuriate me. I always try to write about movies as I find them, not as I think they should be, and for better or worse "Imitation of Life" reflects relations between the races as they were in the 1930s -- and the next few decades, for that matter.

Today, as much as some people would like to deny it, we live in a more diverse age. Our sex symbols, our athletes and our heroes -- even our president -- all reflect that diversity. Like many other families, ours includes mixed-race members -- loved ones who are accepted as equals without question. To my kids, they're simply cousins. And my children will never hear or see me or my wife, or anyone else in our family, distance ourselves from them through pity.

Here are complete credits for "Imitation of Life" and a trailer for segregated audiences: