"Hold Your Man," or Prison Frisson 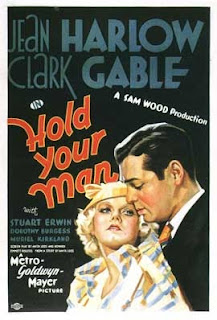 Of the half dozen films that Clark Gable and Jean Harlow made together, the 1933 film "Hold Your Man" is the only one where you're going to see crying -- from Gable.

Gable's without his trademark mustache in this film, and that bare upper lip seems to somehow add to his vulnerability. But beyond that, his character is a well-rounded blend of swagger and sensitivity -- a player who's knocked silly by love.

For that we can thank Gable's performance and the film's warm, funny, well-constructed screenplay, co-written by Anita "Gentlemen Prefer Blondes" Loos and based on her story. As Eddie and Ruby, two small-time hustlers who stumble upon each other, Gable and Harlow play real, flawed people with raw emotions; the kind of people who might end up being your grandparents -- or mine, at least.

"Hold Your Man" begins on the streets of New York City, where Eddie and his sidekick Slim (Garry Owen) are working a con straight out of "The Sting" that involves a "lost" wallet, a "diamond" ring and a greedy mark. Eddie's victim gets wise to him, and the cops give chase. He runs into an apartment building and dashes through the first unlocked door:

The apartment belongs to Ruby, a prototypical good-hearted Harlow dame. We learn right off the bat that she's been around -- she has photos of male admirers all over her apartment and a souvenir pennant from the Albany Night Boat, notorious for illicit assignations. And one of her neighbors comes in to borrow some gin that Ruby made herself.

Even though she's never met Eddie before, Ruby doesn't throw him out -- for one thing, he looks like Clark Gable, but more important is that by her nature she's even more hostile to the cops than she is to Eddie.

Eddie tries a few moves on her, but is ever-so-gently rebuffed -- Ruby threatens to hit him with a hot iron.

Eddie: You know all the answers, don't you?

Ruby: Sure -- to dumb questions.

Eddie thanks Ruby for her help and abruptly takes a powder. But he told her about his hangout, a local speakeasy, and she gets her boyfriend Al (Stuart Erwin being all Stuart Erwin-y) to take her there. She sees Eddie again, and he remembers her vividly, calling her "sweet meat." He tells her to ditch Al and come over to his place later. Then he bilks Al out of $10. Ruby comes over later -- to see Eddie and to take the money for herself.

Eddie: Wait'll you see how I grow on you.

Their rendezvous is briefly interrupted by Slim and a couple of women, including Eddie's old flame Gypsy (Dorothy Burgess). She slaps Ruby, and ...

The next morning we see breakfast for two, and Ruby's wearing the same dress. It's almost as though they're trying to tell us something.

Then Slim enters -- he has a job for Eddie involving the theft of a truck loaded with silks. Ruby warns Eddie not to get involved, but he says he's always been lucky.

Cut to the city jail: 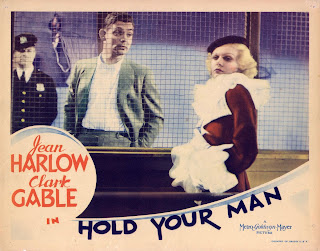 By the time "Lucky" gets out of stir, it's close to Christmas. Ruby has fixed up Eddie's apartment to welcome him home, and she also goes out of her way to leave a letter lying around written by a male admirer. The idea is to make Eddie jealous, but his thoughts turn to blackmail because the guy gives the impression of being well off. Ruby goes along with the plan, but on the day of the caper Eddie's overcome by jealousy -- he bursts in, knocks out the mark, and takes Ruby to get a marriage license.

On their way back to Eddie's apartment, they learn that the mark has died. Eddie disappears and Ruby is sent up for the crime to a woman's prison that seems more like a convent. And one of her roommates is her old nemesis Gypsy. Ruby has no idea where Eddie is, but Gypsy taunts her daily about the letters and money he sends her. Ruby knows better.

The final sequence of "Hold Your Man" takes place on Easter Sunday, and without getting too theological let's just say it ends up being the day that Eddie and Ruby's relationship is resurrected.

It's visiting day, but Ruby isn't expecting any visitors. So when one of her friends acts out and has her visitation jeopardized, Ruby takes the rap to allow her friend to see her sister.

Then Ruby learns that she has a visitor after all -- it's Eddie. And because he's a wanted man, he pretends to be a brother to one of the other inmates. In a wonderful scene filled with tension, Ruby and Eddie edge ever closer to each other in a room crowded with family members visiting their inmates, but Ruby gets placed in solitary just seconds before she and Eddie can reunite.

What happens next is what, to me, makes "Hold Your Man" so unique. Ruby's friends, working behind the back of the prison matrons, work together to reunite Ruby and Eddie. They're like the animals who help Cinderella in the Disney film. One of the other inmates, an African-American woman, is visiting with her father, a minister. And an emotional Eddie approaches him to ask a favor.

Eddie then breaks down.

So we have an African-American minister marrying a white couple -- oh, and the woman is pregnant. I personally don't know how to say "pre-code" any louder. The wedding commences as we hear the police approaching. And this scene kills me:

Gable and Harlow made the great "Red Dust" together, but to me "Hold Your Man" is a much more resonant and ambitious movie. It could have been made yesterday. It's not one of those old movies that you watch from a safe emotional distance -- you engage and identify with the characters. You feel you're watching something special take place between two people, and the climax gives you a shudder of emotion -- a frisson.

Here are complete credits for "Hold Your Man."