The Purnell Pratt Film Festival: "Road to Paradise" and "Paid"

Of all the actors and actresses who appeared in 1930s films, Purnell Pratt (It sounds like dancing!) was certainly one of them.

Pratt (1885-1941) began on Broadway around the turn of the century, and appeared in two George M. Cohan plays -- "Seven Keys to Baldpate" and "Get-Rich-Quick Wallingford" -- before going west in the late 1920s.

He was a character actor, a fellow with thinning hair, a tight mouth, a tiny mustache, a sharp voice and a no-nonsense manner, which meant he played a lot of (corrupt and otherwise) authority figures -- attorneys, judges, politicians, cops, physicians. He played James Cagney's father in "The Public Enemy" and the newspaper publisher who urges action against gangsters in "Scarface." He played District Attorney Markham in several Philo Vance movies, and in his best-known role, he ... well, OK, so he didn't have a best-known role.

In the 1931 film "The Public Defender" he is John Kirk, a corrupt bigshot who has framed a hapless bank treasurer. Unluckily for him, the bank treasurer's daughter (song title: "She Was Only the Treasurer's Daughter, But She Had Impressive Assets") is the main squeeze of Pike Winslow, aka the Public Defender, aka Richard Dix, aka Ernst Carlton Brimmer! The movie's big confrontation comes when Winslow and the cops visit Kirk's home, and everything explodes in Kirk's face: 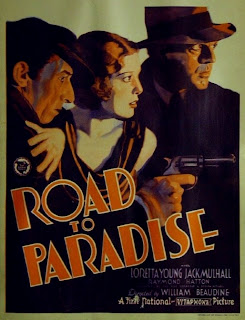 In the 1930 film "Road to Paradise," Pratt is a cop, Inspector Updike by name, who has been called to a New York City mansion after a robbery attempt. A woman lies wounded -- she is nice rich girl Margaret Waring, played by Loretta Young. Another woman sits anxiously at her bedside -- she is nice poor girl Mary Brennan, also played by Young.

So "Road to Paradise" is like a blending of "To Catch a Thief" and "The Parent Trap." Margaret and Mary are long-separated sisters, and their backgrounds are very different. Margaret adores a minuet, the Ballet Russe and Crepes Suzette, while Mary loves to rock and roll, a hot dog makes her lose control, what a wild duet! 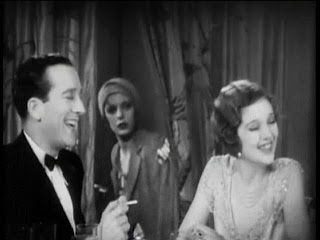 Mary has only just found out about her lookalike -- it happened at a Chinese restaurant, through the miracle of rear projection.

When two of Mary's shady friends learn of the resemblance, they decide to rob the Waring mansion, with Mary as a reluctant participant.

Mary enters the mansion first, and gets caught by the butler, who assumes that Mary is Margaret:

Mary is a bit unsteady, but through some quick thinking she is able to fool the butler, a suspicious cop on the beat, Margaret's French-speaking maid and Margaret's beau, George (Jack Mulhall), who nonetheless is convinced that there's something about Mary.

George leaves, and the real Margaret enters, catching the gang in the act. She is shot (only a flesh wound) and Mary is too guilt-stricken to leave. So she stays, continuing to pose as Margaret while the real Margaret lies unconscious.

Enter Pratt, as Inspector Updike. He's sure that the resemblance of the two women is more than just a coincidence:

Updike tries to back Mary into a corner, psychologically speaking, but she manages to keep wiggling out. Oh, and there's one other wrinkle to the story -- Mary can read minds by holding the subject's hand and holding onto a medallion she's had her whole life that reads, "Each to each/is spirit mate/when in danger/trust to fate." Mary uses this skill to read her sister's mind and find the answers to Updike's probing questions. But that doesn't stop Updike:

"Road to Paradise" ends with the sisters reconciled, with the real crooks captured, and with Margaret willingly giving George to Mary, because she really never loved him anyway. 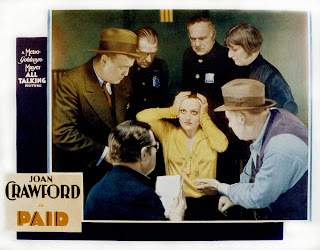 In "Paid," also released in 1930, Pratt is a much meaner character. He's arrogant department store owner Edward Gilder, who is in court as former clerk Mary Turner (Joan Crawford) is sentenced for theft. Mary is innocent -- the stuff was planted on her -- and she gives a very dramatic Joan Crawford-ish statement in court, but Gilder gives not a hoot:

Mary is sent to the big house, where she lives in squalor and even has to take showers with negroes. After three years she returns to honest society, but honest society doesn't seem all that happy to see her, so she teams up with old cellmate Aggie (Marie Prevost) and her gang, including Joe (Robert Armstrong).

Mary has spent her time in stir boning up on the law, so she and her gang start a racket that raises money through (technically) legal means. One of their plans includes the quaint old phrase "heart balm," a relic from the days when rich men wrote letters of love to poor women, who used them in court to get restitution for their broken hearts. In one of the movie's best scenes, Aggie gets involved, with Mary's guidance, in a heart balm case:

But as successful as she is, Mary has bigger fish to fry -- she sets her sights on Bob Gilder (Kent Douglass), the son of the department store owner who sent her to prison.

So we get to see Pratt again, as he re-encounters Mary:

"Paid" starts to bog down a little when Joe is talked into a robbery at Gilder's house, which is really a trap to catch Mary and her gang. There's a murder, and nobody knows who did it, but Joe takes the fall, even though it means life imprisonment, to ensure Mary's happiness. This allows Crawford to act all over the place (what I like to think of as The MGM Effect), and she and young Gilder live happily ever after.

As for Pratt, he would go on griping at people in the movies until "Pot of Gold," released in 1941.