"Mata Hari," or A Kiss Before Spying 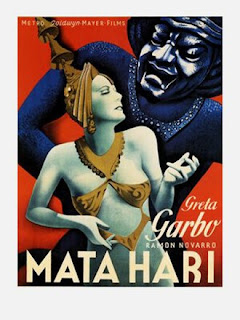 Toward the end of the 1931 film "Mata Hari," our titular heroine (Greta Garbo) has come to a military hospital to see her lover, Alexi (Ramon Novarro), who has been blinded. She is carrying flowers, and when she encounters another blind soldier who is embittered and helpless, she is touched by his vulnerability and leaves them with him. Then she walks past yet another blinded vet who is sitting in the hallway playing "Ave Maria" on the violin before entering Alexi's room, where she takes the place of a nun who is nursing him. 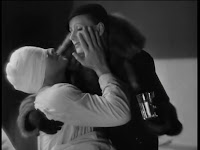 And at this point, you start to think, if it hasn't occurred to you already, that "Mata Hari" lays it on a bit thick.

The movie is, after all, the story of a German spy, not Mother Teresa. True, even in this highly fictionalized form, Mata has her mean moments. But most of the movie is devoted to building a pedestal for Garbo to radiate from -- the character's exploits take a back seat to costuming, bejeweling, set decoration and lighting designed to make Mata Hari look like a cross between a Madonna and a courtesan. 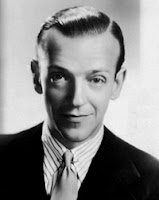 We open on a firing squad, where men who have given secrets to Mata (even Mischa Auer!) are now facing their doom. The French investigator DuBois (C. Henry Gordon, aka Evil Fred Astaire) is unable to get anything out of the men, so shots ring out and down they go. DuBois decides he must see this Mata Hari for himself and decides to attend her performance that evening.

That night, there's a packed house to see Mata do the hoochi-coo. Also in the audience, along with DuBois, is the Russian General Shubin (Lionel Barrymore) and Lt. Alexis Rosanoff (Novarro). Once Mata comes out the men snap to attention, even though they're sitting down:

In case you haven't figured out by now, and I'm not sure how you haven't, Mata Hari's beauty and smooth dance moves drive men mad, mad I tell you! And by using her feminine wiles, she picks up military secrets for the Germans all over the place. Sometimes she takes the secrets and slips them inside a vaginal-shaped orchid she carries around with her.

Lewis Stone and his toupee play Mata's boss, the inscrutable Andriani. Barrymore is one of her many conquests. And Mata is blase about men until she meets Alexi. He comes to her chambers. She pays no attention to him and starts playing the piano, but when he kisses her right on the glissando, she changes her tune.

Then Mata realizes that she has to steal secrets from Alexi, too. So the next night she visits him and allows him to seduce her:

Alas, Mata has begun to fall in love with her target. And this displeases Andriani. "A spy in love," he says, "is a tool that has outlived its usefulness." He sends an assassin to dispense with her -- a guy with a clubfoot who follows her everywhere. And she doesn't even notice him. Some spy.

"Mata Hari" ends where it began, in the shadow of the firing squad. Mata is in prison, but she has tricked Alexi, who can't see, into thinking that it's a sanitarium where she has gone for minor surgery, and the guards all play along:

If anyone could sell the absurd romanticism of a movie like "Mata Hari," it's Garbo, but even for her this is heavy sledding. Still, even when she didn't play exotic characters, she was still capable of driving men mad, mad I tell you!

Here are the full credits for "Mata Hari," and a trailer: