"West of Broadway," or Haunted Honeymoon 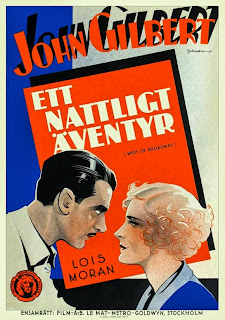 "THERE'S a shocker. What's it called?"

"John Gilbert? The guy with the good-looking girlfriend?"

"Tell me his story in five short sentences." 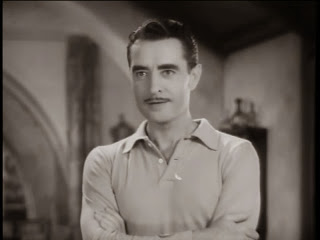 Heavy drinker. Hated Louis B. Mayer. Died young. Left at the altar by Garbo. And talkies killed his career. At least that was the conventional wisdom for years.

"That was six sentences."

He does indeed. I'm trying to figure out if it's acting or not. He plays a guy back from World War I whose fiancee has jilted him. So that's sad. And his sidekick is played by El Brendel. Maybe that's why he's sad. 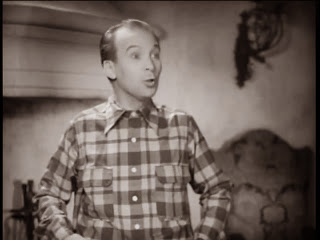 "El Brendel? That's a person? Sounds like the Spanish name for blender."

Hm. Anyway, Gilbert's home from World War I and when his ship comes in he hangs around the dock while the band plays "Smiles" about fifty times and his girl still hasn't shown up. So he goes to her apartment and she greets him with a handshake.

"After being in the war and everything? Not even a pity kiss?"

Not even a pity kiss. Now he's really sad. 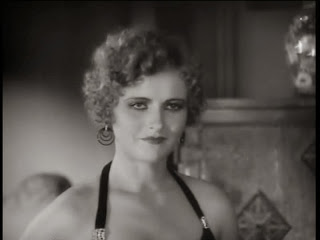 Yep. Again, I'm trying to figure out if he's acting or not. Anyway, he meets a new girl, Dot, who's come to a party at his house.

You're right, but don't finish that sentence.

"She's kind of a little hottie."

Her name is Lois Moran. She had an affair with F. Scott Fitzgerald, made a few more movies, married a Washington big shot and then retired.

"Well, isn't SHE the only Coke in the Coke machine!"

"That's an expression where I come from. Means she's special. So what's happening now?"

So they go out together, and Gilbert sees his old flame -- the one who jilted him. And he introduces his new date, Dot, to the jilter, Ann. He says "Dot, this is Ann. Ann, this is Dot. Dot the I and cross the Ann." Then he looks at Ann and says, "Or is it the double cross? I forget."

Yes. So he's nursing his broken heart, and he gets drunk and marries Dot. The next morning, while extremely hungover, he tries to tell her it was a mistake:

"That guy has a really convincing case of the shakes."

Yeah. I'm trying to figure out if he's acting or not. So, anyway, he tries to dump Dot by offering her money, but it turns out she's in love with him. And in return he's kind of a jerk to her.

So back to the story. Gilbert is a millionaire and he has gone out west to his really cool ranch to recover from his war injuries and to ditch Dot. El Brendel is there too.

And that's Ralph Bellamy as the ranch foreman. And whattya know -- Dot has followed Gilbert out west because she wants to help him overcome his melancholy. 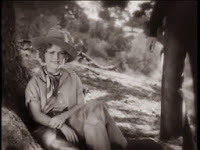 "She looks cute in her little cowgirl outfit."

Yes. She keeps trying to melt Gilbert's cold heart, and he keeps being mean to her. But it's handled in sort of a good-natured bickery way. Meanwhile Bellamy has become attracted to the little filly himself.

"Never mind that -- why is the Chinese cook wearing a sombrero?"

Because we are about to have a festival of ethnic humor with Willie Fung, who plays the cook, and El Brendel. Hold on to your shorts:

"Wow. Thanks for sharing that."

By now, Gilbert is starting to warm up a little to Dot, who has helped him stop drinking. He decides to go to her room for a visit:

"And they share a cigarette. Ooooh. Do they live happily ever after?"

Well, there are a few more rough spots first. And with Gilbert, who can tell from happy? There's something melancholy -- haunted -- about him all through this movie.

"I'm trying to figure out if he's acting or not."