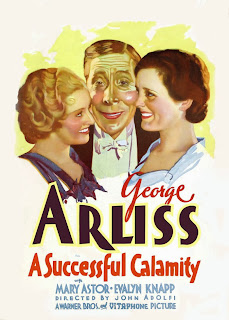 The 1932 film "A Successful Calamity" begins with the hero being congratulated by the President, and even though it's only Herbert Hoover, we are still supposed to be impressed.

The fellow being congratulated is Henry Wilton, international man of banking, played by, as the credits list him, Mr. George Arliss. In the early 1930s, stage legend Arliss became the "prestige" star at Warner Bros., where he had his own production unit. He formed a close relationship with Darryl Zanuck, and when Zanuck left Warner in 1933 to form Twentieth Century Pictures, Arliss went with him.

Arliss was best known for dramatic roles. He played British Prime Minister Benjamin Disraeli on stage and in two films -- for his performance in the 1929 sound version he won an Academy Award. 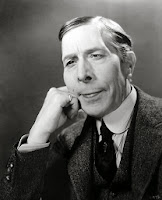 "A Successful Calamity," on the other hand, is a domestic comedy, and Arliss brings a puckish sense of humor to his performance. Some of his deadpan comic takes are downright Charles Butterworth-y.

As we begin, Wilton is returning to his Long Island estate after a year overseas representing Uncle Sam, negotiating payment of foreign debts. He is coming home to his much younger wife (Mary Astor), two grown children (Evalyn Knapp and William Janney) and a life of dinner parties, tea time and musicales.

Wilton is excited to see his family, but he couldn't care less about the other stuff. They, on the other hand, are major dervishes in the social whirl, and Wilton feels left behind, with only the company of loyal manservant Connors (Grant Mitchell).

Wilton's wife has made many changes to the family manse, including redecorating his bedroom in a modern style that doesn't suit him, to say the least:

Connors has saved the old furniture from Wilton's bedroom and has had it placed in his own room, which is where Wilton finds refuge. He doesn't care for tea times or musicales, but he loves his wife -- they've been married only six years -- and he indulges her love of "culture" and her sponsorship of artistic types, including composer-pianist Pietro (Fortunio Bonanova, nine years before he will become Susan Alexander Kane's voice teacher in "Citizen Kane"). In this scene, Wilton withstands Pietro's recital while flanked by talkative matrons:

Night after night of dinner parties and small talk begins to wear on Wilton. He wants to spend some time with his wife and children, so he gets an idea -- he tells the family he's broke.

But wife and children gather around Wilton while keeping stiff upper lips. Son goes to Wilton's business rival to ask for a job, and lets it slip that things are bad. Daughter goes to accept the marriage proposal of her priggish ex-fiance (Hardie Albright), but ex-fiance changes his tune when he finds the Wiltons are without means:

The wife, meanwhile, leaves with her protege and she's carrying a suitcase. Are they running away together?

The movie doesn't get too worked up about this or any other question. Daughter is spared from marrying a prig and ends up with Randolph Scott, who appears for about 90 seconds. Son's confession to Wilton's business rival triggers a series of events that ends in Wilton spiriting a block of stock away from said rival and making a zillion bucks.

"A Successful Calamity" is what used to be known as a star vehicle, showcasing Mr. Arliss in a dignified, slightly stuffy way. Very little is required of him -- mostly he looks bemused while his family grapples with the possibility of poverty. And watching him act that way is fun -- not a lot of fun, but fun.

Here's a trailer for "A Successful Calamity":