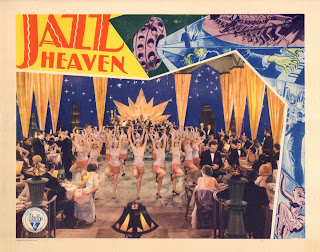 The 1929 film "Jazz Heaven" is the same old story -- boy meets girl, boy loses girl, boy and girl break into a piano factory where he can play his song and they end up on the radio without knowing it.

In the 1920s and '30s, song publishers were like recording studios. They were where the hits were born, with the goal being to publish a song and make thousands from sales of sheet music.

The excitement of the music publishing business could be captured onscreen and used as a metaphor for the drama and bustle of a large city, and it's done very effectively in "The Broadway Melody," released the same year as "Jazz Heaven":

Here, by contrast, is the jazzy introduction to the song publishing business in "Jazz Heaven": 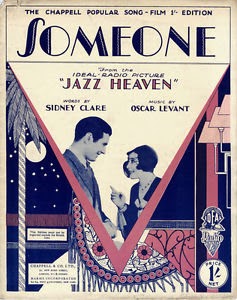 All of "Jazz Heaven," in fact, is kind of meh -- not terrible, but not memorable. One exception is the featured song, "Someone." Oh boy, is it featured. It's hard to get it out of your memory, maybe because they play it 67 times. And it isn't bad -- Oscar Levant wrote the music.

Johnny Mack Brown, wearing trousers that come up to his nipples, is our songwriter hero, Barry, who has come to New York City from Mobile, Alabama, and has brought along his sing-song Southern accent.

Barry has been working for days on one special song, keeping the other residents in his apartment building up all night. This gets him in Dutch with the landlady, but her softhearted husband Max (Clyde Cook) helps Barry escape her wrath.

Then, hark! There is a female voice in the next room whose vocal improvising lends the ending to Barry's song! He uses it, they meet, and sparks fly. She is Ruth (Sally O'Neil) and she works for Kemple and Klucke, music publishers. She takes Barry, who she calls "Big Boy," to meet her bosses.

If Barry immediately sold his song to Kemple and Klucke, "Jazz Heaven" would be a 10-minute movie. But there are complications. One is that Barry's song needs lyrics, and after meeting Ruth he is inspired to write some, all about love and stuff. Then Barry's beloved piano is destroyed when Max tries to move it and it rolls down a flight of stairs. That's why Barry and Ruth perform the song in the piano factory (Max is the night watchman and he lets them in) and it goes over the air:

BUT! There is still conflict in the air. Ruth is being chased by her bosses, Kemple (Joseph Cawthorn) and Klucke (Albert Conti). Klucke tells Ruth he will orchestrate Barry's song and have it performed at a swell nightclub, but only if Ruth accompanies him.

So she does, leading to a misunderstanding on Barry's part, exacerbated by Cawthorn in full-bore cranky mode:

Cawthorn practically had this kind of role trademarked -- see here for more Cawthornian goodness. He does have one of the movie's better lines -- at the nightclub he tells Ruth, "Look at my spats! I got socks on under 'em and everything."

One of the reasons "Jazz Heaven" is so flaccid is the wan performance of Brown, a former football star who ended up making a lot of westerns, including serials. On the other end of the energy scale is O'Neil, who brings a Betty Boop-ish charm to her role. But a Boop alone does not a movie make, and "Jazz Heaven" is just blah.
at November 20, 2013
Email ThisBlogThis!Share to TwitterShare to FacebookShare to Pinterest
Labels: "Jazz Heaven", 1929, Awkward Early Talkie Theatre, Johnny Mack Brown, Joseph Cawthorn, RKO Pictures, Sally O'Neil