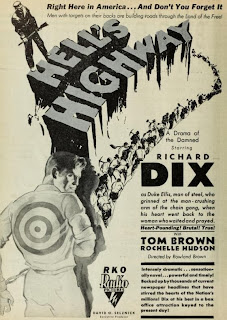 The 1932 chain gang film "Hell's Highway" is not to be confused with the video game, the AC/DC album or the Michael Landon TV series "Highway to Heaven."

No, "Hell's Highway" is a neat little film filled with what every pre-code lover lives for: Those double-take "Holy crap, did I just see that?" moments -- an exchange of spicy dialogue, a stunning visual or a contemporary viewpoint that elevates the film from the hundreds of movies that studios cranked out each year.

It's not quite on the level of "I Am a Fugitive From a Chain Gang," released about the same time. But thanks to the direction of Rowland Brown, who also co-wrote the script, "Hell's Highway" has more than its share of clever, striking set pieces.

Take this one -- it happens at the beginning at the movie, between our hero, Duke (Richard Dix) and another inmate, Matthew (Charles Middleton), also known as the preacher, who's in on bigamy charges. It's morning, and the gang members are performing their daily toilette at the local stream:

Like "I Am a Fugitive," "Hell's Highway" is nominally ripped from the headlines -- it's based on a series of deaths in Florida chain gangs caused by placing prisoners in sweat boxes. But Brown is more interested in telling us about the prisoners and showing us different sides of characters as opposed to reducing them to cliches.

Duke, for instance, is on the gang for bank robberies, something that would make him a hero to depression-era audiences. He has a plan to escape that includes Matthew the preacher. One of the prison guards, nicknamed Popeye, believes that Matthew is psychic, and Duke talks Matthew into telling Popeye's fortune while lifting his keys.

Matthew tells Popeye that his wife is fooling around, and sure enough when Popeye goes back to his house, the wife is there with a gentleman caller. The caller escapes out a window and Popeye shoots his wife. Duke has Popeye's keys and plans to escape, but at the same time his brother (Tom Brown) is brought to the camp and out of loyalty, Duke sticks around. Popeye's blames his wife's murder on the convicts who did escape; they are immediately captured and killed.

Now comes one of the movie's best scenes: the funeral of Popeye's wife, but seen through the eyes -- and the drawings -- of the inmates, while one of them sings "Frankie and Johnnie." Wonderful stuff:

There's other trouble afoot -- one of the convicts has stolen a spoon, which he is slowly, slowly filing into a knife. The stoolie mess steward lets the warden (C. Henry Gordon) know about it, and they share an interesting little game:

The warden isn't exactly a prince, but Brown also shows us his awkward side -- at night, all alone, he works on teaching himself how to play the violin.

The  real bad guy in "Hell's Highway" is a
contractor named Billings, who's ruthless in his use of convict labor to complete a highway project. He's so sold on the sweat box that he writes a fan letter to the owner. If only the convicts put into it wouldn't keep dying ....


The sweat box deaths result in a state investigation that leads to another escape. Duke is fingered as the gang leader, and strapped up for a whipping:

In the end, justice is served, Duke's brother gets paroled and the sweat box is destroyed. But the inmates still have to wear those work shirts with targets on the back -- how did the Coen brothers miss including that detail in "Oh Brother, Where Art Thou?"