"Three Cornered Moon," or Mother, Can You Spare a Dime? 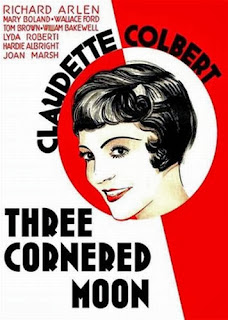 A year before she won an Oscar as a madcap heiress in "It Happened One Night," Claudette Colbert played a not-so-madcap, not-so-much-of-an-heiress in "Three Cornered Moon."

This 1933 film is an offbeat little gem, a kind of screwball ensemble drama that showcases just about everyone -- Colbert, Mary Boland, Wallace Ford, Tom Brown, William Bakewell, Hardie Albright -- at their best. (The male lead, Richard Arlen, is passable but he always seemed more comfortable in action roles -- here, as a romantic lead, he's punching a little above his weight.)

"Three Cornered Moon" is like an upper-class version of "You Can't Take It With You," but without the too-studied (to me, at least) eccentricities of the Sycamore clan.

Our family here is the Rimplegars, who occupy a comfortable almost-mansion in dear old Brooklyn back in the days when it was filled with almost-mansions. Papa Rimplegar, who ran a prosperous laundry, is gone, and devoted but dotty mother Nellie Rimplegar (Boland) thinks nothing of wearing a fringe-y dressing gown while mixing waffle batter, or of ordering taxis by the handful to accommodate the transportation needs of her grown children -- grounded-but-idealistic Elizabeth (Colbert), law student Kenneth (Ford), aspiring actor Douglas (Bakewell) and student Eddie (Brown). Lyda Roberti is the family's Polish maid, Annie.

The family leads a life of slightly rumpled elegance. Everyone assumes that their financial needs will always be met. Free of burdens like having to work at a job, Elizabeth spends her days with fiancee Ronald (Albright), a suffering writer who's a literary genius in the making -- just ask him. ("You write like a tree on fire!" Elizabeth says in what is supposed to be a compliment.) Together they sit in the park; between them, they try to whip up some existential angst:

Meanwhile, back at Rimplegar almost-mansion, reality is about to come crashing in the door because the family finances have been handed, unfortunately, by Nellie. And suddenly the money is gone -- thanks largely to a hefty investment Nellie made in a worthless mine called Three Cornered Moon.

So the Rimplegars are flat busted, and everyone (except Ronald the writer) scrambles to help. Douglas the actor gets a role in a play that consists of one word: "Yes." In this wonderful scene, he rehearses his heart out as a sympathetic Nellie watches, and does a little dusting:

Eddie gets a job as a lifeguard, and starts avoiding meals, which isn't such a good idea. Elizabeth wangles a job in a shoe factory where, like all the other working girls, she must withstand the unwelcome advances of her boss, or lose her job:

The family's one financial saving grace during this period is family friend Dr. Stevens (Arlen), who rents a room in the house, mostly because he's in love with Elizabeth. And when Nellie accidentally ruins dinner one night, the objective becomes to obtain the good doctor's rent money:

Then a family crisis results from Eddie's lack of food, and a plum job is offered to Ronald the writer. Will he sacrifice his artistic sensitivity to the workaday world for the greater good, or be a selfish boob? And there is another possible financial boost -- if Kenneth can pass his bar exam. On the day when the exam scores appear in the paper, everyone gathers round:

One of the many nice things about "Three Cornered Moon," beyond the ensemble performances and the dialogue, is its resolutely un-magical ending. In other movies, the family might somehow get its investment money back. Here they don't. And darned if they still don't end the movie better off than they were in the beginning.