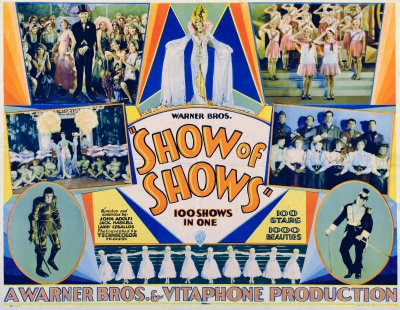 Like most people who love old movies, I can't watch them without thinking about what was going on in the world at the time. And to me, "The Show of Shows," released in 1929, is more than a movie. It's actually more like a stage revue, and its variety of acts makes it a kind of time capsule of pre-depression America, a portrait of life at a studio that was feeling its oats just before hard times hit.

By 1929 silent pictures were as dead as Valentino and talkies were the new standard across America, so the major studios were poaching performers from the Broadway stage and vaudeville who could sing, dance and enunciate dialogue in clear, honeyed tones. Naturally the studios wanted to showcase these new stars, so there was a rash of revues heavy on comedy and music -- "Paramount on Parade," "Fox Movietone Follies of 1929" and MGM's "Hollywood Revue of 1929."

At Warner Bros., a studio that was first in the talkie sweepstakes, they spared no kale. "The Show of Shows" would be mostly in Technicolor, and cost an estimated $850,000. (In prints available today, only one Technicolor number survives.) Contract players by the dozens were trotted out, from Lupino Lane to Myrna Loy to Rin Tin Tin -- only Al Jolson, arguably the biggest star on the lot at that time, was exempted. Some performers headlined numbers, others introduced them, and still others popped up in bit roles. 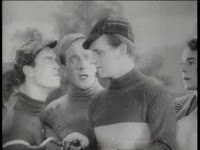 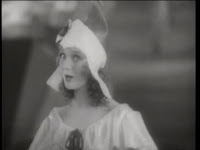 Funny thing is, the headline performers who get the most screen time here -- people like Irene Bordoni, Ted Lewis, Lloyd Hamilton and Winnie Lightner -- would largely be gone in a few years, while the actors in smaller roles, like Loretta Young, Myrna Loy, Chester Morris and Douglas Fairbanks Jr., would emerge as stars over the long haul.

"The Show of Shows" opens with a weird little scene set during the French Revolution, where a titled nobleman loses his noggin to the guillotine, leading a peasant to proclaim: "Prologue is dead! On with 'The Show of Shows'!" Haha, what? Like the silent film was a titled nobleman, but now he's decapitated and the peasants of talkieland have taken over? More likely it was a farewell to live musical numbers -- the prologues that often preceded silent movies -- but it's still weird.

Anyway, here's our emcee, Frank Fay. I've written about Fay before -- his career and performance style are very interesting to me. He may not have made it in movies, but he was a hit in vaudeville, and his droll delivery of a monologue ended up influencing people like Jack Benny. Here's Fay at the beginning of the film -- he enters at the conclusion of a number by the Pasadena American Legion marching band: 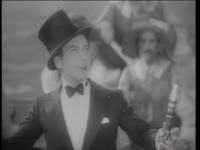 The acts in "The Show of Shows" go from marching bands to Shakespeare, including a pirate number (?) featuring bandleader Ted Lewis, the self-billed "high-hatted tragedian of song," who looks like he's shot through gauze. And there are production 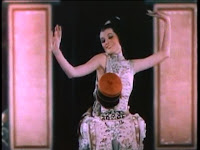 numbers where we glimpse the likes of a coy Myrna Loy (she's actually in a couple of them, including the only surviving Technicolor number) and a young Loretta Young.

Then we come to a number with Fay, Beatrice Lillie, Louise Fazenda and Lloyd Hamilton. They recite poetry that gets sliced and diced into a spicy limerick, and then they do something that happens a couple of times in this movie -- they parody MGM's rival effort, "Hollywood Revue of 1929." In MGM's revue, Charles King sings the tearjerking "Your Mother and Mine," and in "The Show of Shows" this quartet parodies it in a pretty funny way:

Another parody comes at the end of the "Singing in the Bathtub" number, performed by Winnie Lightner in a Busby Berkeley-like setting of old fat men in striped bathing suits. At the climax, Lightner then joins wrestler Bull Montana in "You Were Meant for Me," another parody of a "Hollywood Revue" number:

Then Frank Fay is joined by comic Sid Silvers, who imitates the man who isn't there -- Al Jolson:

And there is cult-cha, even: John Barrymore as Richard III, in a striking performance -- a soliloquy from Shakespeare's "Henry VI": 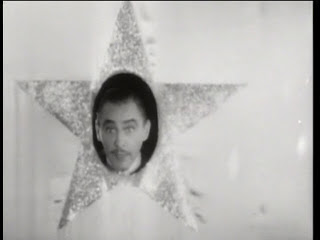 Finally, all the stars who have appeared in the film stick their heads through cutouts of stars and sing the final number, "Lady Luck." Even Barrymore.

There's an interesting allusion to economic hard times in the movie when Fay jokes about a play where the cast is dressed in rags -- "It was a futuristic piece" -- but the full effect of the Great Depression on America, including Hollywood, was still a few months away. "The Show of Shows" is the party before the hangover.

Here are the complete credits for "The Show of Shows."