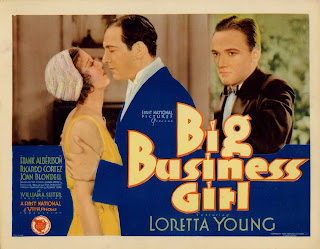 Although she took a turn or two at playing bad girls -- or at least morally ambivalent girls -- early in her career, Loretta Young always seemed more comfortable in good girl roles, especially the good girl who excels in the workplace while attracting the (usually dishonorable) attentions of the boss.  That's certainly the case in 1933's "Employees Entrance," where she is a sales clerk coveted by hard-driving Warren William in full douchebag mode, and in "She Had to Say Yes," released the same year, where she played a department store secretary forced to date visiting buyers. 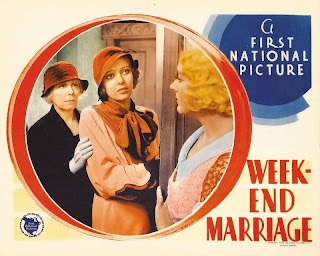 But in at least two other movies from the same period -- 1931's "Big Business Girl" and 1932's "Weekend Marriage" -- Young plays businesswomen who rise into the executive ranks and then realize that the love of a "good" man is more important.

"Big Business Girl" begins on graduation night at Nice White Peoples' College, where Claire "Mac" MacIntyre (Young) and boyfriend Johnny (Frank Albertson) are celebrating at the local country club. Johnny is a band leader, and the group is booked on a European tour. Mac is heading for New York City, to look for a job to pay her student debt.

The only problem is, Johnny's a bit of an, um, how shall we say it? Yes, lazy imbecile. He's ready to ditch the tour and go hang out in New York with Mac.

Johnny: Why should people have to work when there are so many wonderful ways to waste time?

Mac: You're only good for two things -- making music and making love.

Johnny finally hauls ass to Europe, and Mac hauls -- er, goes to New York. In seeking a job, she tromps the streets for weeks, or, in 1930s movie time, about five minutes. She ends up applying for a job at an ad agency run by Robert Clayton (Ricardo Cortez). And she gets it, because everyone else is gone (it's Saturday afternoon), and Clayton likes the way she takes dictation. And her legs.

Anyway, the agency has just landed a new automobile account, and Mac turns out to be very clever at writing ad copy aimed at women. She gets her own office and she's making over a hundred smackers a week:

Clayton immediately starts putting the moves on Mac, and she goodnaturedly tells him no about three thousand times. 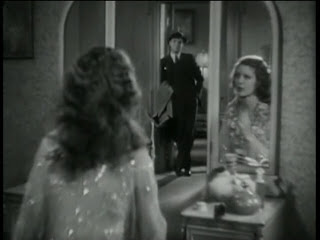 Then, suddenly, Johnny is back in town. Mac catches a glimpse of him in her mirror while she's getting ready to go to a party at Clayton's. Maybe the mirror shot symbolizes her dual role -- as Johnny's mate and as a businesswoman. Or maybe the director just thought it was the easiest way to show that Johnny was back.

Johnny is back because he's walked away from a long-term engagement in Paris, but he's all smiles. "I don't think it's a bit funny to fail in one thing after another," Mac says, and you realize that "Big Business Girl" has done a piss-poor job of showing us just what she sees in Johnny. He pouts -- which pretty much sums up his performance for the rest of the movie -- while Mac goes to Clayton's party, and afterwards, when Clayton escorts Mac home, there's a bit of a scene, because we find out that Mac and Johnny have been secretly married all this time:

Mac ends up getting Johnny and his band a job on a radio program sponsored by the auto company, but he doesn't know she's behind it. So he's just as pouty as ever, and he's started hanging around a wealthy matron as we hear "Just a Gigolo" on the soundtrack:

We're kind of glad to see Clayton slug Johnny, but the truth is that neither guy is worth rooting for. Clayton talks Mac into getting a quickie divorce, and a hotel room tete-a-tete is set up with Joan Blondell as the woman in the case, so that Johnny can be "caught" in the act and Mac can have grounds for the split. But Mac changes her mind, Clayton is foiled, and at the end of "Big Business Girl" Mac and Johnny are together. Hooray?

But you ain't seen nothin' yet.

This one begins with a nice plug for the studio: 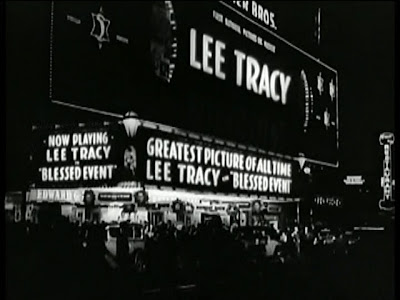 In line to see the stupendous Warner Bros. film "Blessed Event," greatest picture of all time, about a Walter Winchell-type columnist played by Lee Tracy, seating at popular prices, showings around the clock, are Lola (Young) and Ken (Norman Foster), just two lovestruck kids who work in New York City. Lola wants to middle-aisle it with Ken, as Winchell used to put it, but he wants to wait until he has a better job, because, not to put too fine a point on it, working women are slovenly harlots who should be at home (choose a verb) washing, cooking, changing (choose a noun) clothes, meals, babies.

Ken gets a promotion and a chance to go to South America, but Lola wants him to stay. She gets help from her sister-in-law Agnes (Aline MacMahon), who's kept her job even though she's married to Lola's brother Jim (Roscoe Karns). Agnes instructs Lola on how to play Ken and get him to propose instead of leaving for Argentina. She writes instructions for Lola in the secretary's underground language -- shorthand -- so that Ken can't read it. And sure enough, they end up married. And Ken lets Lola keep her job -- for now.

There are two couples that are a kind of counterpoint to Lola and Ken in "Weekend Marriage." One is Agnes and Jim, another two-paycheck marriage. One of the best scenes in the movie takes place at a band concert, where Jim complains about having a wife who works outside the home:

The other couple involves Lola's friend Connie (Sheila Terry), another secretary. Her bullying brother (J. Carrol Naish) is forcing her to marry an ugly little bootlegger because "wimmin belong inna home." In the movie's most troubling scene, Lola goes home with Connie to lend her moral support in standing up to her brother. But the brother slaps Connie down -- literally and figuratively -- as Lola flinches.

So, the movie seems to be telling us, Lola could have it a lot worse. That's comforting.

Then Ken gets a cut in pay just as Lola gets a raise and a promotion, and the strains in the marriage start to show. So when Lola goes to help Connie, Ken gets mad. He goes out and gets plastered, and Lola has to bail him out of the drunk tank:

Lola is then given a choice by her boss -- move with him to St. Louis as his assistant, or lose her job in New York. Ken refuses to move anywhere just because his wife has a new job, and they split up. For the next five minutes of the movie, Lola is furiously courted by one of her firm's partners (George Brent). But when she gets word that Ken is sick back in New York, she drops Brent and returns home.

And this is where it's time for Lola to get smacked down, but good.

Ken has pneumonia, and he's being cared for by his common-law wife -- his companion in the drunk tank. Lola enters, but the doctor won't let her see him -- it'll be too upsetting, and Ken is on the verge of death. Lola protests, and the doctor unloads on her as Lola's mom nods sagely:


Doctor: Let me give you a little advice. One way or another, a man will find a woman to look out for him not only when he's sick but when he's well. That's something you so-called "modern girls" never seem to count on. You talk about freedom, because you think it's something men have and cherish. But they don't. They hate it. They get along best when they're not free. It's human nature, that's all. They need old-fashioned women looking after their health, nagging them into caution, feeding them properly, and giving them families to live for. A great many of these women are just as well-fitted for business as you are, but they don't want it. They put their talents to work instead in what people today think of as a narrow sphere. Well, I don't think it's narrow. I think it's the most important sphere of all. Not much recognition in it, perhaps -- no spectacular publicity -- but it's built up nations before now, and it will build them again.

Mother: You hear that, Lola?

To add insult to injury, the doctor is played by Grant Mitchell, who excelled at playing principled types, including a Franklin Roosevelt-like workers' camp director in "The Grapes of Wrath" who offers the Joad family a few fleeting moments of happiness on their journey to California.

Then Agnes enters. Her insistence on having a job has caused she and Jim to split up.

Agnes: Give up anything. It doesn't matter. The man you love is worth all the jobs in the world.

There's just one thing to do. Lola reunites with Ken, who has rallied, and she puts on an apron.

Ken: What are you going to do?

And the trailer for "Weekend Marriage":