"Morning Glory," or All About Eva 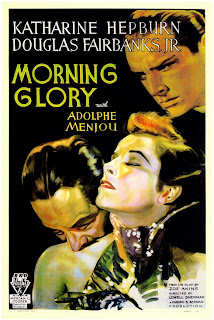 Katharine Hepburn won a Best Actress Oscar for the 1933 film "Morning Glory," but you could be forgiven for asking if the film hurt her career as much as it helped it.

As Eva Lovelace, who's come from small-town Vermont to New York City to be a capital-A actress ("I'll never, under any circumstances, play any part with which I don't feel a sincere congeniality"), Hepburn is by turns irritating, vulnerable, affected, passionate and pretentious. And even though she's acting, her characterization became such a part of the Hepburn persona that you have to think that audiences at the time wondered where the real personality left off and the performance began. When you see those Warner Bros. cartoons from the 1930s with a parody of Hepburn saying things like "I'm so happy to be here -- rally, rally I am," this is the performance they're referring to. Maybe even Hepburn realized the problem -- after being labeled "box office poison" by theatre exhibitors in the late 1930s she worked with Philip Barry to puncture her screen image in "The Philadelphia Story."

"Morning Glory" begins in the office of theatrical producer Louis Easton (Adolphe Menjou). Into the waiting room walks the guileless Eva, who strikes up a conversation with Robert Hedges (C. Aubrey Smith), a kindly character actor. Eva wastes no time in telling him her story:

Inside Easton's office, the producer is meeting with playwright Joe Sheridan (Douglas Fairbanks Jr.). It isn't long before Eva ends up cornering them as well, and they're intrigued, but they have no part for her. Sheridan is working on a new play, but temperamental actress Rita Vernon (Mary Duncan) already has the lead wrapped up. 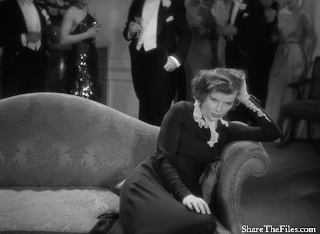 Hedges takes Eva under his wing, and as he comes out of the theatre one night he sees her having a cup of coffee. He doesn't know it, but she's starving and she's too proud to tell him. He invites her to a party at Easton's apartment. There she sees Joe again, as well as other literary lights she's only read about. She also drinks a couple of glasses of champagne on a very empty stomach, and starts doing Shakespeare.

Lowell Sherman directed "Morning Glory." He's probably better known for his roles as a wisecracking drunk in several pre-code pictures, including "What Price Hollywood?" and "Ladies of Leisure." Sherman knew his comedy, but he directs "Morning Glory" with a brave sensitivity. When a sauced Eva is doing Shakespeare at Easton's party, we're not sure how to feel. Sherman doesn't tell us how to feel about her, and refuses to undermine the scene -- or any of Eva's dreams -- with easy laughs. When Eva finishes her performance at the party, the verdict comes from Hedges, her guardian angel -- "Beautiful. Childishly beautiful, impossibly beautiful."

The next morning, Eva is still at Easton's apartment, and the producer sheepishly tells Joe that he and Eva had a romantic rendezvous. He gives Joe a check to give to Eva to ease his conscience. But she's on cloud nine and dreaming of their future together. For Joe to tell her otherwise would be like waking a sleepwalker:

See what I mean? Is that good/bad acting or bad/good acting?

Easton doesn't respond to Eva's overtures. Rejected, she takes a series of job in stock companies and vaudeville. Then comes the opening night of Joe's new play, and leading lady Rita Vernon makes impossible demands just before going on. Joe thinks he knows who can step in and fill her shoes -- Eva, who's playing a small role in the play. Easton calls Rita's bluff, Joe gives Eva a pep talk, and a star is born.

Backstage afterwards, Eva is surrounded by her three male supporters -- Easton, Hedges and Joe. "The three of you make me very proud," Eva tells them, "and I'm going to make you so very proud of me. I'll be wonderful." She starts to get romantic thoughts about Easton again, but he stops her cold by calling her "the most valuable piece of property I've ever had." Joe confesses his love for Eva, but she can't listen right now. She's comforted by her new wardrobe mistress, a former actress herself who was a "morning glory" -- a flower that faded before the sun was very high. Eva swears she won't be like that in a very ambivalent ending:

It's always interesting to re-watch a movie after a long period of time. When I first saw "Morning Glory," I was in my late 20s, a bit of a know-it-all, and easily irritated by Hepburn's performance. Now I'm in my mid-50s and I find it very touching -- and brave. Rally I do.

Here are the complete credits for "Morning Glory"