"The Phantom of Crestwood," or Toupee or Not Toupee, That Is the Question

The 1932 film "The Phantom of Crestwood" is an early example of Synergy, Great Depression Division. Hiya, little fella. 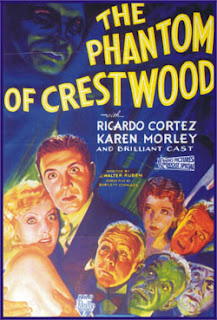 "The Phantom of Crestwood" began as a serial on NBC radio. And since NBC was a division of RCA, and since RCA was the major stockholder in RKO Radio Pictures, a showbiz shotgun marriage was arranged -- "The Phantom of Crestwood" would begin on the radio, but it would end as a movie. And there was a contest to choose the best ending to the mystery, as submitted by the great unwashed public.


The film is introduced by announcer Graham MacNamee, who was a well-known personality at the time. He was the announcer-straight man to one of radio's biggest stars, Ed Wynn, whose Tuesday night program was sponsored by Texaco. Wynn would begin each week by saying, "Tonight, Graham, the program's gonna be different." And then he would tell the same kind of jokes he told last week.

At any rate, here is a camera-shy Graham MacNamee, who definitely has a face for radio, to introduce the pitcha, with a full orchestra tremulating (a word I just now made up) in the background:

(Notice how MacNamee smoothly works in the fact that although winning story-ending entries have been chosen, they aren't being used in the movie.)

"The Phantom of Crestwood" reminds me of another RKO film from roughly the same period -- "Thirteen Women," wherein mixed-race Myrna Loy spends the whole movie killing off a group of women who ostracized her in finishing school. "Thirteen Women" is a better film, I think, with creepier visual effects, but it's the same theme -- a vengeful woman wreaking havoc on people who done her wrong.

In this case, the VW is Jenny Wren, played by Karen Morley. A high-class lady of the evening, Jenny's client book is filled with the wealthy and the powerful. 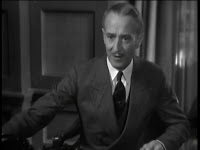 We first see Jenny at a bank in Los Angeles. It seems that the bank president, Priam Andes (H.B. Warner), is a former client. He is amazingly wealthy -- perhaps you've heard of the family mountains? The Andes fortune was made on those little chocolate mints in the green wrapper. Andes is wearing a hairpiece, so we will call him Toupee #1.

Jenny has a favor to ask of Toupee #1 -- to throw a big party for her at Crestwood, his family's ancestral home, a ranch located upstate. And she asks him to invite a bunch of his friends, who happen to be her old clients. And she's kinda sorta blackmailing him, so he says yes.

Meanwhile, a mysterious man is following Jenny. He is played by Ricardo Cortez -- or, as I like to refer to him, 1930s Stanley Tucci.

Meanwhile also, Jenny's niece (Anita Louise) has just graduated from finishing school and is coming to town with her fiancee, who also happens to be Priam Andes's nephew. Jenny invites them to the party at Crestwood.

Niece: All right, but I need some new clothes.

Jenny: You can wear some of mine.

Niece: I don't like those black things you wear.

Jenny: What a shame -- a lot of other people have IN MY PREVIOUS LIFE AS A PROSTITUTE. (I made up that last part.) 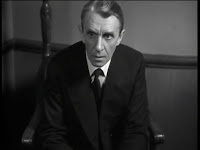 Meanwhile also also, when Jenny first visits Priam at the bank, we see Toupee #2, a fellow known as Mr. Vayne. He stares at Jenny as though he was obsessed with her. He ends up at Crestwood as well.

So now we're at Crestwood, where everyone is having jolly fun playing darts. Since this takes place in the days before safety regulations and liability laws, the darts are roughly the size of zeppelins and are tipped with icepicks. 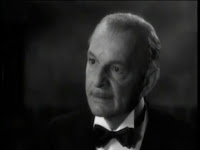 Oh -- and Priam Andes's sister, the mannish Faith (Pauline Frederick), has also shown up. She is upset because her nephew wants to marry Jenny's sister. Like most people obsessed with family/racial/ethnic purity, she is insane.

Jenny meets with the men, all her old clients. They include rich wastrel Eddie (Skeets Gallagher) and Toupee #3, aka Senator Walcott (Robert McWade, seen at right). Jenny has called them together to announce her retirement.

Anyway, Jenny has called them together to blackmail them, and to let them know how much each of them owes her, blackmail-wise:

Jenny is taking their money and going to Europe. And why is the Wren leaving the nest? Because of a traumatic experience with a young lover. She was after him for his money, and he told her he would give up the family fortune to be with her. Jenny told him not to bother because she only wanted the cash, and he jumped off a mountain.

Outside, the wind is whipping and a storm is brewing. Jenny goes to her room and then steps onto the balcony, where she sees something weird and otherworldly -- one of her old customers in his BVDs? No, even weirder -- it is the image of the dead young lover!

Enter Ricardo Cortez with sidekicks played by Sam Hardy and George E. Stone. Turns out that he's a private dick, hired by another one of Jenny's clients to collect some incriminating letters. So he becomes the default murder investigator:

The resulting investigation and capture of the murderer is pretty standard B-movie stuff, involving hidden passageways and thunderstorms and rooms suddenly plunging into darkness. And you can't really say that the performances are all that memorable. If "The Phantom of Crestwood" stands out at all, it's because of its unique connection with a radio serial. The moral of the story: Jenny Wren tries to make bank from the wages of sin, but instead there's hell toupee.