Discovering Smith and Dale: "The Heart of New York" 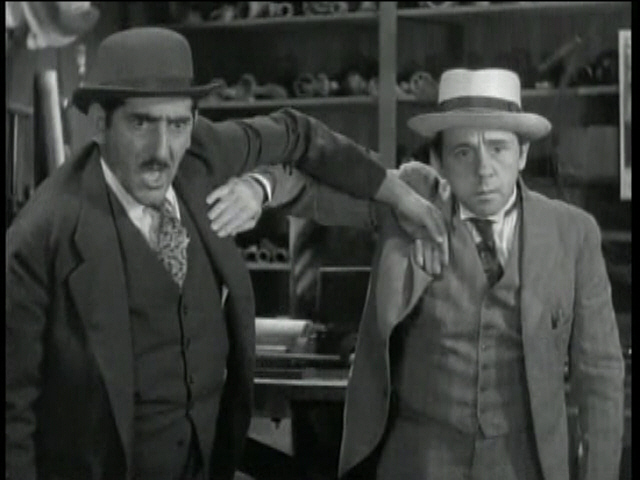 When teenagers Joe Sultzer and Charlie Marks wanted to form a comedy team, they got a deal on business cards from another team that had already broken up. So Sultzer and Marks became Smith and Dale, and they performed together for almost 70 years, from vaudeville to "The Ed Sullivan Show."

Their act, heavy on ethnic humor and malapropisms, and their career together were the inspiration for Neil Simon's "The Sunshine Boys." But despite their stage stardom, Joe Smith (1884-1981) and Charlie Dale (1885-1971) made very few movies. 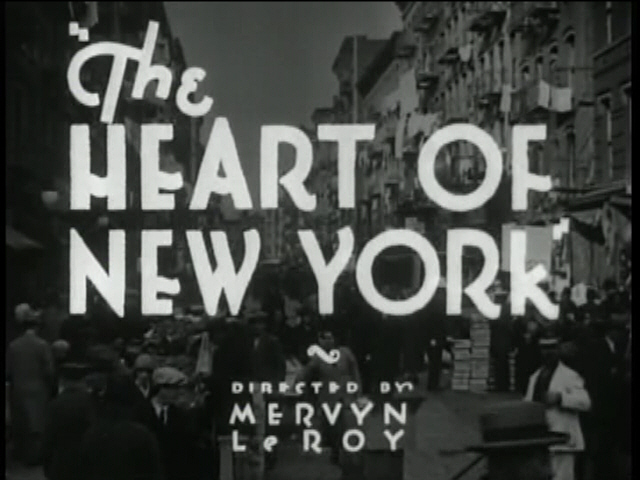 And truthfully, the 1932 film "The Heart of New York" isn't their best showcase. Their vaudeville sketches were more suited to short films. But the movie is worth a look because it does offer a few glimpses of Smith and Dale, and because it's the most Jewish-flavored Hollywood film this side of "The Jazz Singer." It's another reminder that pre-code film making wasn't just about snappy dialogue and racy situations -- it also offered an open view of ethnic diversity that wouldn't resurface until the late 1960s.

Based on the play "Mendel, Inc.," "The Heart of New York" takes place on the Lower East Side, where the heavily Jewish presence is amusingly demonstrated in the opening scene:

Our hero is plumber Mendel Marantz (George Sidney), who spends all his time turning down jobs in order to concentrate on his prize invention, an automatic dishwasher. At the beginning of the movie Mendel is portrayed as being lazy and selfish -- he won't do any outside work even though his family is starving, his daughter needs clothes and his son has bad teeth. And, oy, they're two months behind on the rent!

The family pooh-poohs Mendel's dreams of success -- the only person who stands behind him is neighbor Bessie (Aline MacMahon, bless her heart, nailing a Yiddish accent).

Enter Smith and Dale as Shnapps and Strudel -- matchmakers, real estate brokers, travel agents and anything else that can help them make a quick buck. Shnapps is Mendel's brother-in-law, and he's ready to fix up Mendel's oldest daughter (Ruth Hall) with a nice attorney (Donald Cook).

Shnapps, he will be the first to tell you, is as honest as the day is long. "I don't like monkey business," he says. "I like monkeys separate and business separate." He's come to collect the rent from Mendel, who sells him a part interest in his dishwasher business instead.

Through some plot complications that aren't worth going into, Mendel still ends up in financial trouble and Shnapps and Strudel end up turning Mendel's front window into their office space. And here's where we get their only prolonged sketch together:

Mendel then sells his dishwasher idea and the family is in clover. Everyone else wants to move uptown, but Mendel wants to buy the family's tenement, tear it down and build a mansion. Through the kind of misunderstanding that would take two minutes to clear up in real life, the family thinks Mendel wants to stay in the old building and everyone abandons him -- except the loyal Bessie.

Meanwhile, Mendel's daughter and the attorney have gotten married. Shnapps tells the daughter, "I bet you're surprised I fixed something up for you, huh? That's the way I am -- I've always got something on my sleeve."

Mendel hires Strudel to be his stand-in of sorts, doing all the things that rich men are supposed to do, like playing polo and going to parties. Shnapps visits Mendel and sees Strudel in his white polo outfit. "You look like a bottle of milk," he says.

In the end, when Mendel's wealthy partner tries to cheat him out of his millions, the lawyer in the family steps up and foils the plot. The partner leaves in a huff, with this benediction:

Shnapps: Walk under a streetcar!

Smith and Dale are more than just the spice of "The Heart of New York" -- without them, the movie would barely be worth watching. The soggy plot requires Mendel to turn from a selfish slob into an indulgent father, and neither side of his character -- or anyone in his family -- is worth caring about. Even director Mervyn LeRoy -- with "I Am a Fugitive From a Chain Gang" on the horizon -- seems at a loss. He utilizes scene fadeouts that look like a descending curtain, emphasizing the static, stage-bound quality of the story.

As for Smith and Dale, they made a few comedy shorts in the 1940s, but their ethnic humor was going out of style. Their career lay dormant until the advent of television. Variety shows were tailor-made for their act, and they appeared on "The Ed Sullivan Show" 21 times between 1950-61. Legend has it that, after one appearance, Sullivan told them they needed new material and gave them some money to pay for it. They pocketed the money and went right on doing the old stuff.

Here are the complete credits for "The Heart of New York," and a trailer:

And here's another glimpse of the boys in a 1931 short: