"Hi, Nellie!," or Stop the Dresses 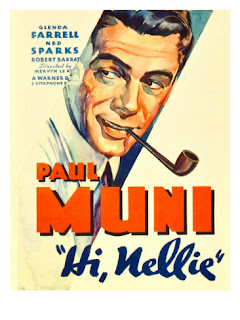 For all of his other formidable talents, playfulness did not come easily to Paul Muni.

You can tell that by watching him in the 1934 film "Hi, Nellie!" He delivers a light touch when the script calls for it, but he's more comfortable during his character's darker moments, where he upends a desk in anger or does some heavy drinking at a bar. 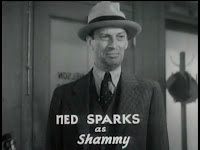 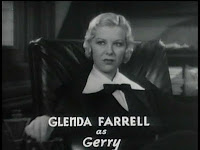 True, it is directed by Mervyn LeRoy, who guided Muni through the classic "I Am a  Fugitive From a Chain Gang," and true, it's got a solid cast of Warner regulars like Glenda Farrell, Ned Sparks, Robert Barrat and Edward Ellis; but "Hi, Nellie!" is only average at best. The wisecracking, fast-thinking newspaperman was the province of actors like Lee Tracy ("Advice to the Lovelorn," "Blessed Event"), Pat O'Brien ("The Final Edition," "The Front Page") and Edward G. Robinson ("Five Star Final"). Muni's performance is like the movie itself -- good enough, but nothing distinctive about it.

Muni plays Samuel "Brad" Bradshaw, the managing editor of the New York Times-Star. He is the kind of guy who wears his hat in the newsroom and always has something tobacco-related in his mouth (pipe, cigar, cigarette -- I don't think he pinched snuff, but he might have snuck some in).

Brad is an all-right guy but tough when it counts, see? For instance, here's how he deals with a new reporter, straight from college and kind of smug (he doesn't even wear a hat in the newsroom), who muffs a story:

When a local bank is hit by an embezzlement and the bank president disappears, every newspaper in town connects the two events and accuses the president of pilferage. But not Brad -- he knows the guy and can't believe he would do something like that. The pompous publisher (Berton Churchill) explodes because Brad won't plaster the paper with hysterical headlines and fires him.

But Brad has an iron-clad, fireproof contract. So the publisher gives him the most humiliating job possible -- to assume the identity of Nellie Nelson, the paper's advice columnist. This comes as a great joke to the current Nellie, reporter Gerry Crayle (Farrell), and to everyone else in the newsroom:

Crayle was given the lonely hearts assignment as punishment for blowing a story, but Brad's move lets her back into the city room. (A romantic relationship between the two is hinted at, but not really demonstrated -- maybe Muni remembers how Farrell turned him in to the cops in "Fugitive.")

Brad has to cede control of the paper to his rival, Dawes (Douglas Dumbrille), and the transition to Nellie is tough for him. After a few months of frustrating work on the job he explodes and leaves the office in a huff. Gerry follows him to a bar, where she lets him have it:

From then on, Brad gets wise to himself and starts writing the column like he means it. But when it soars in popularity, he risks becoming Nellie permanently. Then an opportunity arises -- a heartthrob client has a connection to the missing bank president, and Brad and reporter Shammy (Sparks) do some investigating at a shady nightclub. This seems like a good time to introduce a Ned Sparks clip:

Anyway, Brad and Shammy uncover that the bank president was murdered and then framed for the bank embezzlement. Their scoop releases the city from control of a political machine and Brad from the clutches of the advice column, and the evil rival Dawes looms as the next Nellie.

Here are the complete credits for "Hi, Nellie!" and a trailer: