"Below the Sea," or Love and Depth 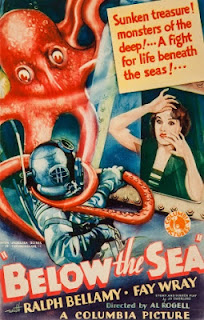 Ronald Reagan is credited with a great line about his days of making B-movies: "They didn't want them good, they wanted them Thursday."

And that's the standard rap -- they were projector fodder destined to belong at the bottom of double features with forgettable actors, mediocre scripts, blah blah blah blah.

But the thing is, despite low budgets and tight shooting schedules, the Hollywood assembly system in the 1930s was still capable of cranking out movies that were better than they had any right to be. "Below the Sea" is a good example. This 1933 film boasts a script by Frank Capra collaborator Jo Swerling, creative direction by Al Rogell and vivid performances by Ralph Bellamy, Fay Wray and Frederick Vogeding.

Vogeding appeared in several dozen movies between 1933-42, usually in small parts as doctors or military men. Beginning with 1939's "Confessions of a Nazi Spy" he made frequent appearances as Gestapo officers. "Below the Sea" features one of his rare leading roles.

We open during the final days of World War I, in a German sub commanded by Vogeding's character. The men converse in their native tongue, with no subtitles. And right around the time one of them says something that sounds like "I want a Zima," there's an explosion.

Then, in battle footage thrillingly borrowed from the RKO movie "Suicide Fleet" (and who knows where else), the sub, she is sunk. There are only two survivors -- the captain and some other guy. Both of them are aware that the sub was carrying a load of gold bricks, and while they dry off on a desert island the other guy draws up a map of the location, which gives the captain nasty ideas:


(By the way, in a post-code movie the guy just would have fallen off the cliff; only in a pre-code movie would you see the body go all the way down, bouncing off outcroppings along the way.) 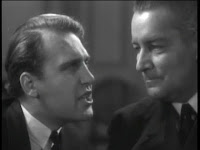 Fast forward twelve years, and the captain has changed his name to Schlemmer. He's been waiting all this time to retrieve the precious stash, and he's talked a waterfront bar owner/floozy (Esther Howard) into financing the trip in exchange for a cut. He's also hired a deep sea diver, Mac, played by snarling Ralph Bellamy.

Their first trip out to get the treasure is doomed because there's a big storm, and because Schlemmer keeps the destination a secret, so the crew doesn't know where to go. This doesn't quite make sense to me, but it gives Bellamy a chance to wear a rain slicker and hat like the Gorton fisherman on those old TV commercials.

Another three years pass, and Schlemmer has signed on as the captain of a scientific expedition, and he's bringing Mac with him. They're aboard the good ship Adventure, funded by socialite Diana Templeton (Fay Wray in full-blown hottie mode). Templeton is sincere about science, but she also knows the power of public relations, so she does things like pose for photos in Mac's diving suit.

Mac in turn is so nasty to her that there's really no doubt how he really feels, especially since Diana gives as good as she gets:

The byplay between Wray and Bellamy is one of the highlights of "Under the Sea." He scowls and puffs his pipe as she runs around the boat wearing anchor-accented outfits. And she kisses other guys in front of him just to get him hot. But when she puts on Mac's diving outfit and goes down without his permission, that's a bridge too far. He purposely takes his time rescuing her and she passes out. He gets in trouble for it, but she shows her mettle by apologizing to him. And he finds himself torn between Diana and the loot in the sub:

Meanwhile, Schlemmer and his floozy are ready to bring the gold to the surface and cheat Mac out of his cut. They drug him and take off to collect the booty. Mac awakens just in time to discover that Diana is down in the diving bell again and it's being attacked by an amorous octopus, so instead of heading off Schlemmer he changes into his suit and dives in to rescue her: 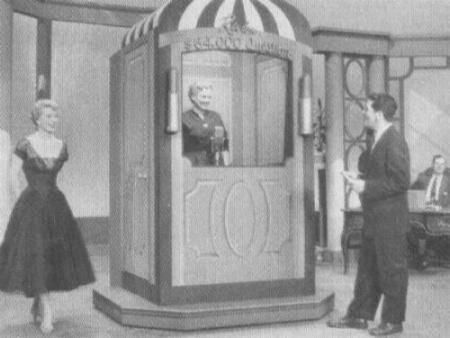 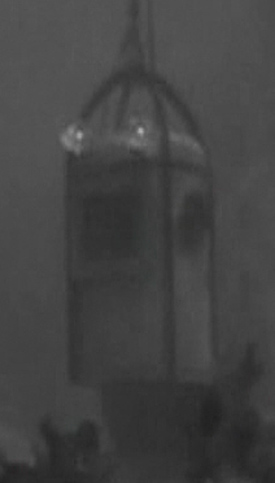 
In the end, the captain's nefarious scheme comes to naught, and Diana and Mac end up together. As a couple they generate actual heat -- it's nice to see Bellamy playing something other than the milquetoast role he essayed in romantic comedies, and Wray's character is tough and likable. Their clinches seem unusually enthusiastic -- makes you wonder if something was going on in real life between them, as well.

Here are full credits for "Below the Sea."