"He Walked by Night" and the Dawn of "Dragnet" 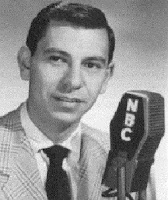 In 1948, Jack Webb was an actor with a couple of small movie roles under his belt. If he was known at all, it was for his radio work, especially "Pat Novak for Hire," a detective series where he played the title role.

The show was really a parody of the genre -- Novak spoke dialogue intentionally and beautifully overwritten by Richard Breen, such as "She had blonde hair and was kind of pretty, except you could see that somebody had used her badly, like a dictionary in a stupid family." 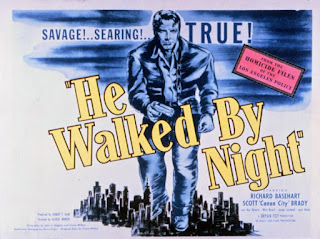 Then came "He Walked by Night," a semi-documentary style film based loosely on the crime spree of Erwin "Machine Gun" Walker, who terrorized Los Angeles in 1945-46. Walker, a World War II vet, had worked in police station radio departments before the war. He kept one step ahead of the cops because he knew how to monitor the police radio and how to switch his modus operandi from break-ins to store robberies to avoid being tracked. He also carried an arsenal of weapons, hence his nickname.

Filmed at real locations and using a cast of novice and little-known actors, "He Walked by Night" was made on a shoestring and supervised by Bryan Foy, who'd built a career on producing B-movies at Warner Bros. dating to early talkie days.

Webb had a small part in the picture, as crime scene technician Lee no-last-name. During breaks in shooting, Webb shot the breeze with LAPD Sgt. Marty Wynn, the movie's technical adviser and one of the officers who had captured Erwin Walker. Wynn offered the opinion that real police cases  -- even if they were just routine crimes -- often contained more human drama than fictional ones, and cited a few examples.

And Webb, with his extensive radio background, got an idea.

But first, the movie.

At the beginning of "He Walked by Night" is a foreword talking about how the story is based on true events. "Only the names are changed ... to protect the innocent."

Catchy. At least Webb thought so, because the same phrase would be part of the memorable opening of each "Dragnet" episode -- and, in the process, a kind of cultural catchphrase.

An eerily effective Richard Basehart plays our criminal, here named Roy Morgan. In the first few minutes of the movie he gets caught trying to break into a radio supply store and kills the officer who catches him.

Morgan is a loner who stays in the shadows. He asks for help from no one -- in one harrowing scene, after he's wounded in a gun battle, he sterilizes medical instruments and removes the bullet himself. He lives in a nondescript apartment filled with radio equipment, weaponry and his one companion, a dog. He has a collection of license plates that he puts on stolen cars to cover his tracks. But his preferred method of conveyance is running -- through the extensive network of storm drains under Los Angeles, which are dry most of the year.

We first get a glimpse of this in a scene describing Roy's crime wave, narrated by Reed Hadley and beautifully photographed by John Alton:

The police call the robbery victims together in the hope of assembling a composite image of the thief. Captain Breen, played by Roy Roberts, runs the show. Webb's character mans the slide projector, adding a high-tech touch! He loads different facial images as everyone chimes in about what he looked like:

Once the image is decided upon, copies are sent to all media outlets and Det. Marty Brennan (Scott Brady) visits every local police department to see if Roy worked in its radio department. At one department he finally gets a nibble -- a letter with Roy's signature and a Hollywood postmark. Brennan talks to the area postman and checks out Roy's neighborhood in disguise. Roy observes from his apartment, an island of darkness in the California sunshine:

The final chase underground is a memorable one, with flashlight beams dancing about and gunfire reverberating through the storm drains. And after the killer has been caught, there's a "Dragnet"-style sense of accomplishment, but with the awareness that tomorrow will bring another case.

Shortly after "He Walked by Night" was released, working with Marty Wynn, Webb approached the Los Angeles Police Department with the idea of presenting true cases. On June 3, 1949 "Dragnet" premiered on NBC radio with little fanfare, and that was fine with Webb. He wanted time to shape the show, to infuse it with the kind of deliberateness and authenticity that hadn't been heard on radio before. Six sound effects men worked on each episode -- at least twice as many as on any other radio show. If a character called long distance you heard every operator at every exchange sending the call along. Webb knew the number of steps a cop would take walking from one office to another and made sure the exact same number was heard on the air. He utilized police jargon and code. And he made sure that his character, Det. Sgt. Joe Friday and his partner, Det. Ben Romero (Barton Yarborough) had an easy rapport.

By 1950, "Dragnet" was gaining in popularity, and it deserved it. On radio and in its early days on TV (the video version premiered in 1951) the show was far removed from the better-known late-1960s revival, which was weighed down with Webb's sermonizing and simplistic scripts. By that point the guy who got his start parodying detective shows with "Pat Novak for Hire" was now parodying cop shows, but he didn't know it.

Here's a "Dragnet" radio show from 1950. Note the multi-layered sound effects and how the silences between lines of dialogue are sometimes as important as the lines themselves. Note also that Friday and Romero are blinded to the suspect's identity almost until the end. But also note their attempts to get the suspect to confess -- they're almost comical, but deadly serious. And I think the ending of this episode builds palpable suspense out of just three people talking -- it's a perfect example of radio's ability to ignite the theatre of the mind.


"He Walked by Night" is in the public domain, and here is the entire movie: