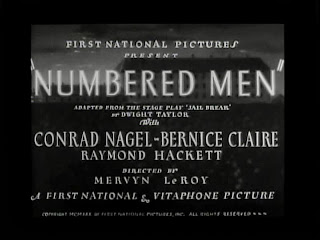 The 1930 film "Numbered Men" opens in a prison "built with the bricks of shame," not to mention the cement of indifference and the trowels of sadness.

Inside the prison are men -- numbered men! -- who count the days until freedom and stare longingly at the world of forbidden sunshine just beyond the gates.

One of them is 26521, or "2" for short. He is played by Conrad Nagel and he is a former counterfeiter. He's the nicest darn convict you'd ever want to meet -- a philosophical, pipe-puffing prisoner who is a source of friendship and wisdom.

Another is 31857, or "7," played by Raymond Hackett. He is a young man in prison on a trumped-up charge, and he is slowly going crazy because he's wondering if his girlfriend Mary (Bernice Claire), on the outside, will stay faithful. Whenever he talks about her he starts acting all over the place:

Yes, life behind the walls is lonely -- soooo lonely. So lonely that the pictures of women have been torn out of all the magazines. And, as one convict says, "Somebody even tore out a picture of Ben Turpin!" (Simulation below.)

These prisoners are in the honor group, which means there are never any guards around. In fact, there look to be only about three guards in the entire prison.

But soft! 2 and 7 have been placed on a road crew, so they will soon be out in the sunshine again! And 3, who is the worst honor prisoner ever, is planning his escape.

Anyway, when the honor convicts come back to the farm after a hard day's work, 7 and Mary are reunited. She wants to him to escape and run away with her, but he will not, so she gets an idea of her own:

In the end, 2 and 7 manage to dispose of 3 and Mary's other old boyfriend, 7's innocence is proven, and the prison honor program is shot to hell.

Here are the full credits of "Numbered Men."