Preston Sturges's "Strictly Dishonorable" is a story about love, honor, happiness and the relative merits of living in West Orange, New Jersey.

The play had been a hit on Broadway, and Universal bought the rights for a then-unprecedented $125,000 -- not bad for something that Sturges wrote in six days.

The 1931 film version of "Strictly Dishonorable" is basically a filmed play, and as a pre-code film it has an adult tone that the 1951 remake would lack, although it isn't nearly as spicy as the poster at left (boiinnnnng!) would imply.

True, the story is stage-bound in many ways -- the plot is very linear and director John M. Stahl shoots the scenes in long takes; characters are disposed of and re-introduced the old-fashioned way, through old-school entrances and exits. But there are plenty of examples of Sturges's trademark wit, and a bit of cheerful cynicism that blends well with the sweet, romantic story.

We open in a speakeasy in a New York City apartment hotel. The place is run by the genial Tomasso (William Ricciardi, repeating his Broadway role), who treats his long-term guests like family. One of them is Judge Dempsey (Lewis Stone), a philosophical type who provides free legal advice to Tomasso in exchange for an old-fashioned or three. Dempsey was the maiden name of Sturges's mother, and the judge is very lovable and sympathetic. 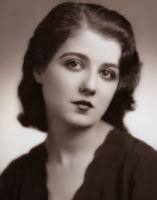 Into the speak walks Henry Greene (George Meeker) and his fiancee, Isabella Parry (Sidney Fox). They've driven from their home with Henry's folks in West Orange, NJ for a night on the town, and Henry can't wait to have a nightcap and then escape from the "dirty" city. On the other hand, Isabella, a Southern belle from Mississippi, loves it. Henry's a bond broker, and as humorless and as pompous as a contemporary Wall Streeter.

We learn Isabella's story -- she grew up on a plantation where things were flush, but tough times came "when cotton got high [and] women stopped wearing underwear." Henry came along as her knight in shining armor, and he never lets her forget it. "You just leave your happiness to me," he tells her, "and you won't have a thing to worry about." She, on the other hand, seems frighteningly ready to be subservient to him.

The Judge can't help but notice this -- and when Henry starts pontificating about life in West Orange, the Judge becomes one of the first in a long line of Sturges characters to give the raspberry to small-town life:


The Judge's joshing brings Henry to a boil, and it gets worse when Gus Di Ruvo (Paul Lukas) enters. Gus is another resident of the hotel. He's a bit of a hound where the ladies are concerned, and he's also -- although he doesn't make a big deal about it -- a famous opera singer.

Isabella loves opera. Gus likes Isabella. Henry no like. He explodes and starts throwing the word "dago" around, which is a bad idea in a room where seven-eighths of the occupants speak Italian.

And, at last, Isabella reaches her limit. She gives him back her engagement ring and he leaves in a huff. (A two-door huff, to paraphrase Groucho Marx.)

Isabella: There's been something the matter with me for months and I didn't know what it was.

Judge: What was it?

Isabella: It was Henry. Entirely too much Henry.

The Judge agrees, adding that Henry threw "honor" around as if it was a weapon. "Honor should be tempered with the milk of human kindness," he says, "if you can temper anything with milk. And I'm afraid too much honor is apt to curdle the milk."

At any rate, Isabella is stranded at the hotel, but she doesn't mind. She'd like to spend the night with Gus, and at first he's open to the idea, until he realizes how young and inexperienced she is. Then HIS honor comes into play, even as he wishes it wouldn't:


The Judge hovers like an overprotective parent to make sure Isabella stays out of harm's way, but he doesn't need to -- Gus ends up sleeping in the Judge's apartment. The next morning, Isabella awakens as chaste (and as chased) as ever, but Henry returns and immediately starts assuming the worst.

Henry: Are you pure?

Isabella: Are YOU pure?

Despite the threat -- I mean appeal -- of life with Henry, Isabella can't resist the charms of Gus:


"Strictly Dishonorable" doesn't exactly move at a fast pace, but there are pleasures to be had in Sturges's dialogue and the performances of Lukas and Stone. Most impressive of all, however, is the petite Fox, whose career flagged in the mid-1930s. She gives Isabella a quiet charm and warmth -- you understand exactly what Gus sees in her and why he's ready to give up his playboy days. Unlike her placid, centered character, Fox was plagued by depression, and she died of a sleeping pill overdose in 1942. Here is a tribute to her career: