"The Las Vegas Story," or Craps-ablanca

First off, let me say it's nice to communicate with you. We haven't seen you around the studio since Preston Sturges gave you a swirly in the men's room. And also allow me to thank you belatedly for your Christmas gift -- the nail clippings certainly were packaged attractively. I am especially appreciative considering that many of the other executives received what I believe to be Mason jars full of urine. 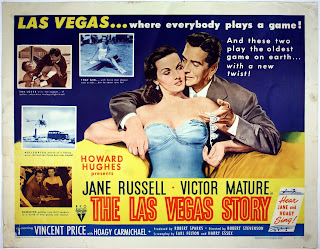 Now, down to cases. As you know, we have received a letter from the legal department at Warner Bros. alleging that RKO's newest, most exciting, most brilliant, triumphant film spectacular of this or any year, "The Las Vegas Story," is a blatant copy of "Casablanca." I have reviewed this letter and can refute these allegations completely. Here they are, one by one:

1. The Warner letter states: "A story of romance and betrayal set in a city that is teeming with corruption and violence, "Casablanca" begins when cafe owner Richard Blaine is confronted once again with his great love, Ilsa Lund, who deserted him in Paris. "The Las Vegas Story" opens exactly like "Casablanca," by showing us a map of the region and then focusing on the city. Here a local police detective, Lt. David Andrews (Victor Mature) is confronted once again with his great love, Linda Rollins (Jane Russell), who deserted him as Ilsa did Rick."

Ha! Well, Chief, I don't have to tell you that "The Las Vegas Story" is TOTALLY different from "Casablanca." For one thing, is Casablanca the same city as Las Vegas? I think not! Just as the map of Africa is completely different from the map of Nevada! Is Las Vegas "teeming with corruption and violence"? Of course not! And just look at the character names -- Rick and Ilsa, David and Linda. TOTALLY different. 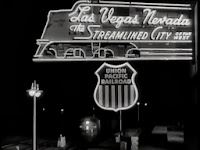 Ha! We've caught them with their pants down on this one, chief. The arrival of Lloyd and Linda in Las Vegas is TOTALLY different than the arrival in "Casablanca" -- unlike Ilsa and Victor, Lloyd and Linda come to Las Vegas by TRAIN! Also, unlike Sam, Happy is white.

Well, Chief, the runaways in "Casablanca" and "The Las Vegas Story" are TOTALLY different. In our movie, the boy has blond hair.

In conclusion, Chief, there are no grounds whatsoever to the Warner claims. Our movie centers around a stolen diamond necklace, while "Casablanca" centers around stolen letters of transit. And our movie ends with a helicopter chase! Unless I'm mistaken, there were no helicopters used during World War II. But there were plenty of Nazis, which are TOTALLY missing in "The Las Vegas Story."

I think that's it, Chief. Say hello to Faith Domergue for me.