Fast, and with authority, punctuating his words with jabs into the air. Or, when he is "contrite," spreading his fingers over his heart. Sometimes he uses this gesture so often that it looks like he's pledging allegiance to his co-star.

Tracy first found fame as Hildy Johnson in the stage production of "The Front Page," and although he didn't play Hildy in the 1930 film version -- Pat O'Brien did -- Tracy found himself typecast as the quick-thinking, ever-scheming, fast-talking operator who was just this side of a con artist. 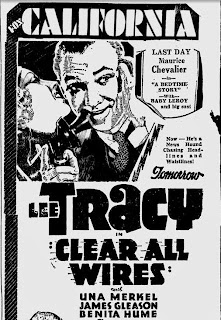 In the 1933 film "Clear All Wires," for instance, Tracy is Buckley Joyce Thomas, foreign correspondent for the Chicago Globe. He's a freewheeling scoop machine given to dressing in military garb, and when the movie opens he's been missing for days, captured by enemy insurgents in Morocco. In reality, he's been treated like a king -- his unflappable style has charmed the leader of the group, who has given him an exclusive interview.

When Buckley is released, he is greeted with joy by his right-hand man, Lefty (James Gleason). Buckley's disappearance "shoved beer right off the front page," Lefty tells him. Buckley starts dictating his big story, even as his rival, Pettingwaite of The New York Times, pooh-poohs Buckley's methods. So Buckley takes a break from his story and lets him have it, in a standard Lee Tracy diatribe:

We then move to Russia, where Buckley has swiped Pettingwaite's hotel suite. He's there to cover the 15th anniversary of the Soviet Revolution, and he meets an old flame, Kate (Benita Hume), but it's hard to romance her because he has another old girlfriend, Dolly (Una Merkel) along. This makes for crowded quarters:

(Notice that the aria Dolly is practicing, badly, is the same one that Susan Alexander practices, badly, in "Citizen Kane.")

"Clear All Wires" is based on a play by Bella and Sam Spewack, and it has funny moments, but it's largely stagebound -- most of the action takes place in Buckley's suite. And the actual plot -- something about Buckley's battle with the Soviet secret police -- isn't really that interesting. Tracy keeps things hopping largely because Tracy himself keeps hopping. And talking. 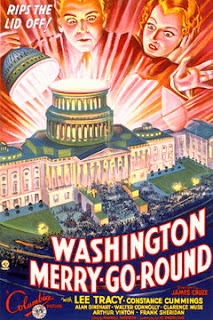 The 1932 film "Washington Merry-Go-Round," on the other hand, has a stronger script that gives Tracy an actual character to play. He's Button Gwinnett Brown, a newly elected congressman who is a namesake and descendant of one of the signers of the Declaration of Independence. "His blood is bluer than one of Sophie Tucker's songs," we're told.

Brown takes his heritage -- and his responsibility -- seriously. He's heading for Washington in 1932, at the peak of the battle between the government and the "bonus army," World War I veterans who want an early payment of the bonus they're scheduled to receive in 1945. The bonus army has set up a camp across the river from D.C. in Virginia, and one of Brown's old Army buddies is a leader. He invites Brown to speak to the men, and what he tells them isn't exactly music to their ears:

Voted into office by the local political machine, Brown turns on his benefactors and lets them know he will be his own man in Congress. He's helped by Alice (Constance Cummings), who becomes his political mentor; she's also the daughter of his state's Senator (Walter Connolly). In the typical Tracy tradition, Brown makes speeches in the darndest places, including the Library of Congress:

"Washington Merry-Go-Round" offers odd little foreshadows of Frank Capra's "Mr. Smith Goes to Washington." The screenwriter, Jo Swerling, was a frequent Capra collaborator, but he didn't work on "Mr. Smith." Still, as in "Mr. Smith," Brown gets inspiration from a late-night visit to the Lincoln Memorial, and, as was the case with Claude Rains's character in "Mr. Smith," Alice's distinguished Senator father is revealed to be an unwitting partner of the movie's bad guy, power broker Norton (Alan Dinehart). Brown's friend killed himself over his involvement with Norton, so he becomes Brown's sworn enemy:

Like "Mr. Smith," "Washington Merry-Go-Round" tries to make nice with the powers that be before decking them with a sucker punch. The movie is "dedicated to those public servants in Washington who, despite the malignant force which operates to defeat the principles of representative government, are serving their country sincerely and well." But most of film is cheerfully cynical about how Washington really works, and how bosses like Norton worm their way into the system.

As for Tracy, he kept playing roles like this up until 1934, when he was scheduled to play a reporter in MGM's "Viva Villa," opposite Wallace Beery. The company was on location in Mexico when Tracy created a "scandal." One story is that he urinated off a balcony onto a military parade; another is that he returned an obscene gesture from someone watching the parade and thereby "insulted" Mexico. Whatever the reason, he was replaced in the film by Stuart Erwin.

But it's too simple to say that incident alone ruined Tracy's career. Like James Cagney's gangster, Barbara Stanwyck's tough dame and Joan Blondell's golddigger, Tracy's fast talker with loose morals was very much a pre-code character -- one that was phased out with the rise of the Production Code, Mexican balcony or no Mexican balcony.