I was 10 years old when I remember seeing Gene Kelly for the first time, and I was not impressed.

Soon after that I had the opportunity to see "Singin' in the Rain" for the first time, and I was skeptical.

Another musical with Gene Kelly? Puh-leeze. 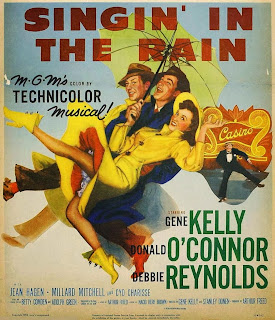 But this was at a time in my life when I was starting to pay attention to what people considered good movies and why, and also starting to recognize performers, so I gave it a shot.

Beyond that, on a purely emotional level, "Singin' in the Rain" radiates joyousness and unlimited possibility. It's a perfect fit for Kelly's athletic, exuberant dancing style. He's Don Lockwood, joyous star of silent movies, making a mint on routine swashbuckler films that don't particularly tax his talent. He rose through vaudeville, performing in tank towns with his pal Cosmo (Donald O'Connor) before coming to Hollywood:

When sound movies enter the picture, Don's secure screen persona is jeopardized, and for the first time, really, his ability is tested. Also being tested by the transition, and failing, is Don's screen lover Lina Lamont (Jean Hagen), whose voice shatters microphones and whose egomania is positively Kardashian-ian ("I make more money than Calvin Coolidge -- put together!"). Starlet Kathy Selden (Debbie Reynolds) is hired to dub Lina's voice, and she and Don fall in love.

The film's script, by Betty Comden and Adolph Green, is incisive and funny, and even more of a wonder when you consider what they were given to work with -- reportedly, producer Arthur Freed just told them to write a movie called "Singin' in the Rain" and to include all his songs. "All we knew," Comden said later, "was there would be some scene where someone would be singing, and it would be raining."

And as good as the script is, "Singin' in the Rain" tells its story almost exclusively through the musical numbers directed and choreographed by Kelly and Stanley Donen. Think about it -- "Good Morning," "You Are My Lucky Star," "Make 'Em Laugh," "Singin' in the Rain" and the "Broadway Melody" ballet, which introduced the 10-year-old me to Cyd Charisse and moved my puberty up by at least a year.

And then there's my favorite scene in the movie, the only dance number in film history built around an elocution lesson:

If you don't have a smile on your face when you watch that, I don't want to know you. You can see the friendly competition between Kelly and O'Connor -- you have to believe that dancing with each other made them both better.

Released in the shadow of Kelly's Oscar-winning "An American in Paris," "Singin' in the Rain" didn't get much attention when it was released in 1952. But it's a more streamlined movie, with genuine comedy and iconic moments. Just show the still of Kelly, with an umbrella, on a lamppost to someone and ask them what movie it comes from -- they'll tell you it comes from the movie with the scene where someone would be singing, and it would be raining.
at December 03, 2013
Email ThisBlogThis!Share to TwitterShare to FacebookShare to Pinterest
Labels: "Singin' in the Rain", 1952, Debbie Reynolds, Donald O'Connor, Gene Kelly, Jean Hagen, MGM