"Kept Husbands," or Bride and Gloom

Yes. And to anticipate your next question, it's called "Kept Husbands," and it was released in 1931. 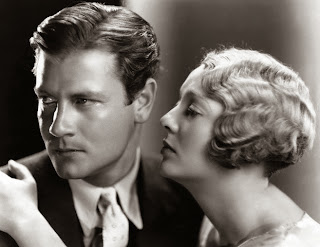 "Starring, from the looks of things, Hunky McHunkerson."

I say so. Yes, he is the male lead. He is a steel worker named Dick. He has been invited to the big boss's house for dinner because he helped rescue three workers and refused any reward for it. The boss is impressed.

Dorothy Mackaill, our female lead. She is Dot, the boss's spoiled daughter. At first, Dot makes fun of Dick, but then she makes a discovery about him:

"So he's a former halfback who threw the winning pass to beat Yale? Not to take anything away from his skill, but how hard is it to beat Yale in football?"

Never mind. This helps establish his bona fides as an all-American good guy who loves honest labor and his mother, not necessarily in that order.

"And he's good looking, while Dot's current boyfriend is a pasty-looking guy with a Maybelline mustache. So of course she's going to pick Dick."

"Now here's a new guy who talks like a leaf blower."

That is Ned Sparks, and that voice was his trademark. He plays Hughie, a guy who boards at Dick's mom's house. When Dick comes back from his dinner, Hughie gives him a hard time:

"So I'm thinking that in most other movies he had better lines than that?"

Usually. But I like to include Ned Sparks clips.

"OK. So Dick and Dot get together."

Yes. He is worried that he can't provide for her in the manner to which she is accustomed, but she is persuasive:

"And they take a long honeymoon in Europe. It lasts for like ten minutes, which in old movie time is about three months."

Then Dick goes back to his job, but he's been promoted to Third Vice President, and he does nothing all day. Instead of building bridges, he's shuffling cards and practicing his bridge game.

"There's probably a smoother way to say that."

I don't know -- it's a tricky little simile.

Yes. Dot is rich but worthless, and Dick is worthless but rich.

"There is truth in what you say."

There is but one hope for Dick -- he must stand up to his wife and go to St. Louis for that big bridge job that will help him regain his self respect.

"Bridge as in real bridge and not as in a card game."

Yes. I told you it was tricky.

"So I'm guessing that somebody's going to learn a lesson here, and it isn't Dick."

Dot goes to visit Dick's patient, loving mother, who explains to her that husbands actually WANT to be kept -- not by money, but by love and understanding:

"And only husbands deserve that? Seems to me that's kind of a two-way bridge."