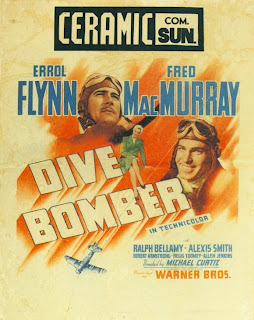 The 1941 film "Dive Bomber" was released a month or so before the attack on Pearl Harbor. America wasn't yet formally involved in World War II, and it would be a few more months before Jack Warner started strutting around the Warner lot in the Army officer's dress uniform he'd had custom tailored in Beverly Hills.

But like a lot of films from that time, "Dive Bomber" anticipates America's entry into the war and gives us a lovingly-presented parade of military might -- in this case it's air power, in Technicolor, yet, and flanked by the rugged faces and forms of Errol Flynn, Fred MacMurray and Ralph Bellamy. "Dive Bomber" looks great, and director Michael Curtiz never wastes a patch of blue sky -- there are always planes flying across it while troops and/or equipment pass by below. Dig:

World War II is a thing we're used to seeing in black and white, so the Technicolor scenes in "Dive Bomber" -- especially of real-life settings like an aircraft carrier staffed with actual people -- are riveting:

Based on a story by former Navy flier Frank "Spig" Wead, who also gave us "Ceiling Zero" and "Test Pilot," "Dive Bomber" oozes testosterone -- watching it makes you want to put on a khaki uniform and light up a Camel. Because there is smoking, always smoking -- in fact, the movie is positively Hawksian in the amount of cigarette-related male bonding that occurs. If you like a guy, you offer him a smoke. If you don't, you don't. And the symbol of ultimate bro-ness is to have the same cigarette case as your buddies.

The three guys with the same cigarette case at the beginning of "Dive Bomber" are Navy flyboys Joe (MacMurray), Tim (Regis Toomey) and Swede (Louis Jean Heydt). Watch them frolic and light each other's smokes!

Alas, tragedy occurs when one of the three (the guy whose name isn't as prominent in the credits) passes out during a steep dive and he crashes. On the ground, working in vain to rescue him, is Dr. Doug Lee (Flynn), whose fancy-pants education at Harvard and Johns Hopkins means nothing -- Nothing, you get me? -- when he can't bring the pilot back from the great beyond.

Dr. Doug decides to become a flight surgeon and try to solve the problem of pressurization and oxygen deprivation. In a weird coincidence, he begins flight lessons on December 7 (not 1941, but still). Then Dr. Doug is forced to team with the surly Dr. Lance Rogers (Bellamy), who is bitter because he is a grounded pilot. He doesn't even offer Dr. Doug a cigarette!

No, just joshing. Everyone ends up respecting the heck out of each other and working together to keep 'em flying. Joe joins the team when one pilot's death due to fatigue hits him right in his cigarette case:

"Test Pilot" is chock full of delicious propaganda -- Hollywood always knew how to sell a war -- and our leading men, especially Flynn, deliver solid performances. There are, however two unnecessary inclusions -- one is Alexis Smith, who spends the movie chasing Flynn even though he doesn't seem that interested. The other is "comic relief" by Allan Jenkins as Lucky, a bumptious sailor who's trying to escape from his equally bumptious wife.

Since "Dive Bomber" was a big hit at the box office, it was fair game for a parody on "The Jack Benny Program." The show aired on October 26, 1941, so there are opening jokes about Halloween, including this exchange between Benny, sidekick Mary Livingstone and announcer Don Wilson:

Don: You don't have the excitement nowadays that you used to have on Halloween.

Jack: I guess you're right.

Don: I remember when I was back in Denver as a kid. We used to have the time of our lives!

Jack: Denver? You should have seen the way we celebrated Halloween in Waukegan! The old-fashioned pranks we used to play. But -- kids don't have fun like that anymore.

Then comes the parody of "Dive Bomber," with Jack unable to decide if he wants to play Flynn, MacMurray or Bellamy. Finally, the production gets underway, with bandleader Phil Harris as Flynn, Dennis Day as MacMurray and Benny as Bellamy.