"The Life of the Party," or Lightner Up 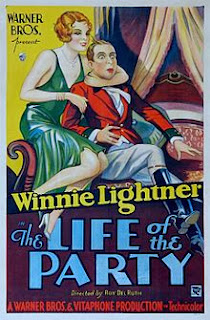 The 1930 film "The Life of the Party" begins in Times Square, where there are massive crowds even though there's no TGI Friday's or Olive Garden.

Right in the middle of this teeming humanity is the Acme Music Store, where Flo (Winnie Lightner) and Dot (Irene Delroy) charm the customers and try to sell sheet music. Within the movie's first five minutes, Flo manages to plug songs from every current Warner Bros. musical release -- "The Show of Shows," "Show Girl in Hollywood," "Hold Everything," "Fifty Million Frenchmen," "Gold Diggers on Broadway" -- and then she performs a little something called "(He Got a) Poison Ivy (Instead of a Clinging Vine)." See for yourself:

You have just witnessed the only song left in "The Life of the Party."

Originally filmed as a musical, and in two-strip Technicolor, "The Life of the Party" lost its numbers in the great nobody-likes-musicals-anymore scare of 1930, which also caused the film version of "Fifty Million Frenchman" to lose most of its score . On top of that, no prints of the Technicolor version seem to exist, so "The Life of the Party" is a musical comedy with no color, very little comedy, even less music and a whole lot of Winnie Lightner. 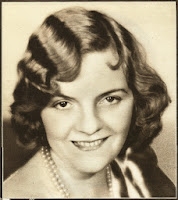 Lightner began in vaudeville and signed with Warner Bros. in the late 1920s. After making a big hit in "Gold Diggers on Broadway" and performing "Singin' in the Bathtub" in "The Show of Shows," her screen character was established -- a brash but likable schemer out for a sugar daddy. In this film she and Delroy (who only made another movie or two before disappearing completely) are good-hearted gold diggers, and their target is the sputtering Frenchman LeMaire (Charles Judels). He runs a high-class dress shop staffed by the worst models in the world, who stare at the camera and arch their backs to show how chic they are.

LeMaire gives the girls his choicest frocks, thinking he will see them that evening for some ooh-la-la. But they hightail it to Penn Station and give him the slip. (Get it?) That night, he comes to see the girls with a friend, and -- quel disappointment!

The first few minutes of Judel's furniture-breaking act are kind of funny. Unfortunately, he does the same bit several more times during the movie, with steadily diminishing returns.

The girls end up in Cuba, where Flo meets the eccentric Colonel Joy (Charles Butterworth), who raises racehorses. When Flo discovers that a soft-drink tycoon (Jack Whiting) is also visiting their hotel, she tries to set him up with Dot. Dot, in turn, falls for another guy who in reality is the soft-drink tycoon, because Flo messed up.

Then we're off to the races, where Colonel Joy discovers his jockey is drunk. Despite her heft, age and total lack of ability, Flo ends up riding the Colonel's thoroughbred, and that is not a euphemism.

In the finale, Flo finally figures out who the real tycoon is, and she and Dot stage the old reliable -- a fainting spell -- to get his attention. They do this a lot -- "I've been flat on my back on every floor in this hotel," Dot says. The unwanted Colonel keeps showing up, offering a glass of water.

All's well that ends well -- as for Lightner, she made a few more films at Warner's. Then she married director Roy Del Ruth (who directed this film) and disappeared from the screen by the mid-1930s.
at December 18, 2013
Email ThisBlogThis!Share to TwitterShare to FacebookShare to Pinterest
Labels: "The Life of the Party", 1930, Charles Butterworth, Jack Whiting, Warner Bros., Winnie Lightner