Grandma Dixie and the Feds

I've already written about my Grandma Dixie a time or two. She had the unique ability to play piano by ear, by just hearing a song and then pounding it out. Consequently she kept very busy, playing solo gigs and with musical groups all around Louisville from the 1930s until the early 1980s. 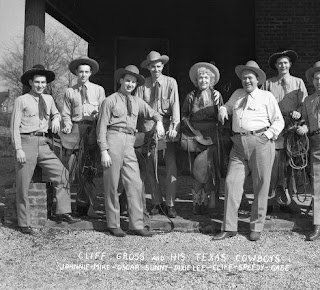 The groups she performed with most often were Clayton "Pappy" McMitchen and His Georgia Wildcats, and Cliff Gross and His Texas Cowboys. The photo at left shows her with Cliff Gross's group, and just around the time that photo was taken, Cliff Gross got into a little trouble with the gubmint.

In the summer of 1943, we were in the thick of World War II and gas rationing had been in place for about a year.

Except, apparently, for the Cliff Gross musical aggregation.

On June 17, the U.S. Office of Price Administration grounded Gross, all the Cowboys and one Cowgirl, charging them, according to this article from Variety, with purchasing gasoline through the black market. Was Grandma Dixie complicit or did she just go along for the ride? We will never know, ladies and gentlemen of the jury. Here's the story: 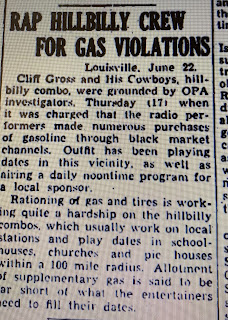 at January 24, 2022
Email ThisBlogThis!Share to TwitterShare to FacebookShare to Pinterest
Labels: Grandma Dixie, Stuff I Read in Variety Back Issues