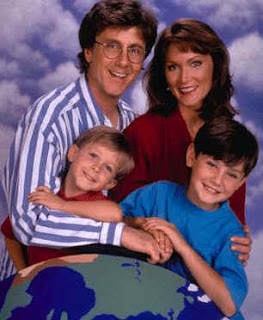 And I'll bet you a quarter that the last time you thought about "Dave's World," if you have thought about it at all, was on June 27, 1997.

"Dave's World" ran on CBS from 1993-97. Four seasons, 98 episodes. It was based on the work of Dave Barry, a newspaper columnist. (Remember them?) Specifically it was based on two books by Barry -- beyond that he had nothing to do with the show, which is a shame, because he's a pretty funny guy.

(Side note: One of my favorite Barry lines came in a column about being awakened at dawn by his toddler. Barry's wish was that someone would create an early-morning TV show for kids called "Let's Go Back to Bed.")

If "Dave's World" had any kind of ratings success, it was due to its location on the CBS schedule. It aired on Monday nights, nestled snugly between two popular shows -- "Evening Shade" and "Murphy Brown." It finished the season tied with "The Fresh Prince of Bel-Air" in 21st place. It stayed in the same slot the next season, sandwiched between "The Nanny" and "Murphy Brown," and again finished in 21st place.

In the fall of 1995 "Dave's World" was moved to Wednesdays, and the slide began. The show fell out of the top thirty, and Patrick Warburton was added to the cast as a love interest for Mia.

Then came the end -- a move to Friday nights for the 1996-97 season. Competition was tough -- this was the heyday of ABC's TGIF sitcom lineup that included "Family Matters," "Sabrina the Teenage Witch" and "Boy Meets World." "Dave's World" kicked off the night for CBS, followed by a new show, "Everybody Loves Raymond." "Dave's World" was yanked in January, with remaining episodes burned off in the early summer. "Everybody Loves Raymond" was saved by a move to Monday nights.

"Dave's World" received one Emmy nomination -- in 1996, for Outstanding Cinematography for a Series. Congratulations, Tony Yarlett! Sorry you didn't win. Its theme song was Billy Joel's "You May Be Right," performed by Southside Johnny. But because of rights issues, you won't hear it on the DVDs of the show. And as far as DVDs go, only three of the show's four seasons are available. There is no discernible online outcry or petition to make season four happen.