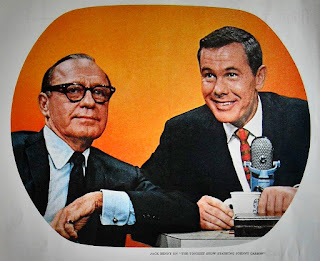 In 1949, Jack Benny took advantage of new capital gains laws and moved his popular program from NBC to CBS, an immense boost to that network in ratings and prestige. At about the same time, a senior at the University of Nebraska named Johnny Carson was putting together his thesis, “How to Write Comedy for Radio,” a tape-recorded presentation filled with examples of Jack Benny’s work. Carson couldn’t have known it at the time, but within a few years Benny would become one of Carson’s biggest boosters – they formed a kind of mutual admiration society that would last until Benny’s death in 1974. Benny had been one of America’s dominant comedy voices during the 1930s, ’40s and ’50s – and by utilizing tricks he’d learned from Benny, Carson, as host of “The Tonight Show” for thirty years, would become one of America’s dominant comedy voices during the 1960s, ’70s and ’80s.
Sources:
Johnny Carson, by Henry Bushkin
King of the Night: The Life of Johnny Carson, by Laurence Leamer
“Red Skelton Butts Scenery, Sprains Neck,” Rome (GA) News-Tribune, August 18, 1954
“Comics’ Comics,” TV Guide, January 15, 1955
“Johnny Carson: Young Man with a Grin,” TV Guide, September 3, 1955
“Johnny Carson Defined Late-Night TV,” The Los Angeles Times, January 24, 2005
“How Jack Benny and Harry Conn Stumbled onto the Formula for Situation Comedy,” Humanities, Summer 2017
at March 29, 2022
Email ThisBlogThis!Share to TwitterShare to FacebookShare to Pinterest