Wayne Perkey and the Resurrection of WHAS Radio 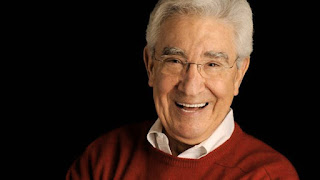 We've lost the genuinely kind Wayne Perkey to complications from COVID. A few years back I interviewed him for "Fourth Street Nights," an upcoming e-book about Louisville radio during the 1960s and '70s, when WHAS was getting pummeled by WAKY and WKLO -- until Perkey came to town, that is. Here's an excerpt:

Programs weren’t the only things that hadn’t changed – the staff had largely stayed the same as well. When Jerry David Melloy came to work at WHAS radio in late 1966, he was the first announcer hired in ten years. The radio and TV stations were still in The Courier-Journal building at Sixth and Broadway, under the ownership of the Bingham family.

At that time, WAVE radio was the adult choice on the dial. While the teenagers tuned to WAKY or WKLO, their parents tuned to 970 for the city’s first air traffic reports and deejays like Joe Fletcher, Jim Lucas and Pat Murphy.

But WHAS radio was about to undergo a seismic change. The search began for deejays who would be more freewheeling on the air.

“The key,” said general manager Hugh Barr, “was to have personalities who were articulate and smart, but with a sense of humor. We wanted people to get the impression that we took what we do very seriously, but we didn’t take ourselves seriously.”

One of those personalities – who would stay with WHAS almost thirty years and play a huge role in personifying that image – was working at the time at a TV station in Mobile, Alabama.

Wayne Perkey’s co-worker and good friend Bob Morse had already left Mobile for WHAS, where he would become general manager in the 1980s. Perkey, a Tennessee native, was looking for a job a little closer to home, and heard about the station through Morse.

At about the same time, Perkey came across an article in a trade journal about the WHAS Crusade for Children.

A former deejay, Perkey missed the immediacy of radio. So he and Barr got together to talk about a radio job.

“I got there in the morning and parked in one of those spaces where there’s no parking from 3 to 6 p.m.,” Perkey says. “I thought I’d be in there about half an hour. But I ended up meeting everybody at the station, and when I came out that afternoon, my car had been towed.”

Perkey went home to Mobile and consulted with his family. Together they decided to make the move. A few weeks later, Perkey flew back to Louisville to start work. It was 1970.

“I came into town,” Perkey says, “and Jim Lucas was just back from New York, hot as a firecracker at WAVE. WINN is cranking out the country hits. As I’m driving into town from the airport, I see this big billboard – ‘Bill Bailey, Won’t You Please Come Home? He did. WAKY mornings.’ You knew coming in that Louisville was a great radio town, and the competition was going to be tough.”

For his first month in Louisville, before his wife and children joined him, Perkey lived in Bob Morse’s basement. He signed on WHAS in the morning – at that point, the station was still signing off each evening rather than broadcasting all night.

Perkey did his show each morning, and during the rest of the day he shook hands and kissed babies.

“We were knocking on doors,” Perkey says. “Three or four nights a week I’d speak to a civic club, group, whatever. I figured if I came to your Kiwanis Club and spoke, and 50 people would be there, I’d get maybe three of you as listeners. And maybe one of you would wind up with a [ratings] diary one day. How good would that be?”

Before his time in Mobile, Perkey had been a rock and roll deejay in Knoxville. And, in the fashion of the day, his hair was still long. At WHAS radio, engineers were still spinning the records, and all the deejays had to do was talk. But Perkey came in – this long-haired outsider – with ideas for improving the sound of the station.

“I started throwing around all these recording terms – dovetails, overlays – and the engineers looked at me like, what is this guy talking about? He needs to be over on Fourth Street at the rock station!”

Despite the best efforts of the WHAS team, audience growth was slow. Every so often, Barr would call Perkey into his office to tell him how the ratings were going.

“He’d tell me how we were doing in all the categories,” Perkey says. “And I remember vividly the day he asked me into his office and actually let me look at the numbers. I said ‘You’ve never actually shown me the numbers before.’ And he said, ‘If I’d shown them to you before now it would have destroyed you.’ Because in the beginning nobody was listening. Nobody. They loved Paul Clark with the news in the morning, and they listened to us for UK football and basketball. And that was it.”

Gradually, however, people began to sense something different about this station. A group was being put into place that included Perkey, Melloy and afternoon man Jeff Douglas. Even more important, listeners themselves were playing a role, through phone calls the deejays would take all day long. Someone would call in with a joke, or news about a traffic tie-up, or a comment on current affairs.

"We tried to develop as close to two-way communication as you could get in radio,” Perkey says. “It was my kind of radio, and the kind Milton Metz was doing every night on his call-in show. The idea was if I can get you to feel as though you’re part of the program, then you assume ownership of that program.”

“It just kept building,” Melloy says. “You knew you were reaching more people. And we just stuck with it and it kept working.”

“It’s awful to try and change an established image,” Perkey says. “Human nature is that you don’t change something until it becomes more painful to stay with the way things are. And you could talk about how exciting the station was and all that but, when it comes to radio, people want to listen to their friends. We had to convince people we were going to be there for them, that when they needed us, we’d be there.”

And they knew that time – and the aging of the listening audience – was on their side. They knew the typical baby boomer would be listening to WAKY or WKLO. Then they’d get older, go to college or to work, start making car payments and having kids. And they’d start caring more about weather, news or traffic reports.

“You’d find us,” Perkey says, “and maybe you’d leave your dial on our station. And it worked.”

“At the time,” Barr recalls, “what we were doing was pretty revolutionary. But it was also a wonderful, wonderful time.”

By that point, everything Barr had built – every gain made by Perkey, Melloy, Douglas, Metz and the others – had come to fruition. It happened all at once, one afternoon in the spring of 1974. The station was there non-stop, without commercials, when Louisvillians needed an outlet to talk, report or just vent about a cataclysmic natural event that tore the East End apart.

But that’s for another chapter.