"Thirteen Women," or Trance with Me 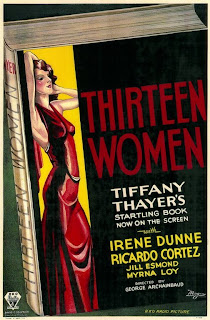 In "Thirteen Women" (1932), Myrna Loy is Ursula Georgi, a beautiful but mysterious mixed-race woman who uses hypnosis, astrology and an exploding toy ball to rid herself of the wealthy schoolmates who ostracized her because of her lineage.

Talk about carrying a grudge.

Based upon a novel by Tiffany Thayer, who must have been the Jackie Collins of his day, "Thirteen Women" is lurid stuff that involves murder, madness and suicide.

You see, Ursula has been planning her revenge for years, do you hear? YEARS! So she seduces an astrologer who is putting together horoscopes for all the women.

Under Ursula's spell, the astrologer sends each woman a horoscope that warns of imminent death or other sorrow, and their imaginations get the better of them, leading to scenes like this:

Hazel Cousins, the screamer, was played by Peg Entwhistle. Shortly after this movie was released, she committed suicide by jumping from the giant HOLLYWOOD sign.

Anyway, back to the plot. When the astrologer outlives his usefulness, he is dealt with as well:

The one classmate who isn't unnerved by the predictions is Laura Stanhope (Irene Dunne), probably because, based on the looks of her house, servants and chauffeur, she has a zillion dollars. Ricardo Cortez, who resembles a 1932 version of Stanley Tucci, is the detective on the case.


Because she can't unnerve Laura, Ursula targets Laura's son by giving him an exploding ball for his birthday, which leads to a chase through a newly-paved Beverly Hills just on the verge of bursting with bungalows. I live for this kind of Southern California location shooting, especially in movies of the early '30s:

Actually, there are only 11 women in "Thirteen Women," but if you want to get technical about it, you should probably just watch another movie. What makes "Thirteen Women" so much fun is Loy's performance as the exotic temptress Ursula, just two years before she would become cast as the perfect American wife in "The Thin Man." And the movie has its own unique visual style -- check out the ending, when Ursula's hallucinations begin to haunt her and she sees the astrologer she killed:

I've always been more partial to Dunne in comedies than dramas, and in "Thirteen Women" she's much less interesting than Loy -- take the scene when Loy tries to make a classmate shoot herself through hypnosis and then achieves almost orgasmic glee when she hears the gunshot. Her role may be stereotypical, but Loy gives it her all and despite the coldness of her character, she's actually the heart of "Thirteen Women."