"The Lost Squadron," or Aces High 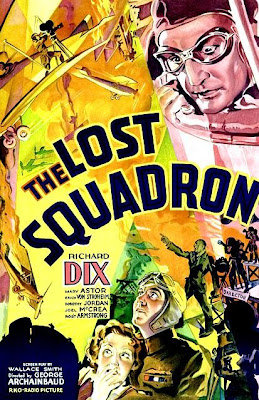 (Caution: Spoilers ahead, and we aren't talking about the wings of the biplanes.)

Richard Dix made his film debut in 1917, and although he was active in sound films until 1947, his looks and acting style were very much out of the silent days. He was a beefy guy, usually in take-charge roles, and in 1932's "The Lost Squadron" he is Gibby, the official (during World War I) and then unofficial (after the war) leader of a ragtag group of flyboys -- Woody (Robert Armstrong), Red (Joel McCrea) and Fritz (Hugh "woo woo" Herbert).

The movie opens on Armstice Day, 1918, and as soon as Gibby's watch reads 11 a.m. on November 11 he stops shooting at his German targets and gallantly salutes them.

On the ground, the guys celebrate by getting drunk and then they return to America, and various disappointments -- Woody is broke, thanks to a cheating business partner; Red is out of a job (he passes it up so that an older co-worker won't be fired to make room for him) and Gibby comes home to his love, Follette (Mary Astor), only to find another man in her opulent apartment. "I've been bad, Gibby," she says. Awkward!

So the boys are out on their own again, and then time passes pretty quickly -- we go from the victory parades in 1918 almost immediately to the crash of 1929. (Really? What happened to the roaring '20s?) Anyway, it's 11 years later and Red, Gibby and Fritz, against all odds, are still hanging together, being bums and stuff. They have hopped a freight to California because Woody is there, working as a stunt pilot in movies for autocratic director Von Furst (Erich Von Stroheim), a preening Prussian with a production company logo that looks suspiciously like a swastika.

Von Furst is known for encouraging dangerous stunts -- and lo and behold, he is married to Follette ("they say he beats the behoozis out of her," Woody tells Gibby).

Before you can say "madame is the greatest star of them all," all the flyboys are working for Von Furst -- and Gibby and Follette have had a reunion, much to the displeasure of her husband. This really puts Von Furst in a bad mood, although for him it's a short trip, and he takes it out on his cast and crew:

Gibby also has eyes for Woody's sister (Dorothy Jordan), nicknamed "Pest" because she chides Woody about his constant drinking. Unfortunately for Gibby, the Pest has eyes for Red. If Richard Dix represented the leading man of the 1920s, Joel McCrea was the shape of things to come -- tall, effortlessly handsome and already performing with the relaxed manner that would serve him so well into the 1930s and '40s.

"The Lost Squadron" takes a wonderfully dark turn when Von Furst sabotages Gibby's plane. But Woody secretly takes out the plane instead, and ends up seriously killed. In revenge, Red captures Von Furst and holds him hostage in the hangar (say that three times fast). Then there's a struggle with a gun, and Von Furst ends up ventilated. This leads to a great scene where Fritz, Red and Gibby prop up the dead Von Furst to throw suspicion off themselves:

But Gibby knows that the jig is up, and as the squadron leader it's up to him to do something about it:

"The Lost Squadron" offers a cool look at behind-the-scenes Hollywood of 1932, and it screams "pre-code" in its portrayal of Follette sleeping her way to the top, in Woody's drinking and even in allowing a lead character to get away with murder. The script is co-written by Herman Mankiewicz and was the first picture to credit David O. Selznick as Executive Producer. The movie isn't exactly up to the level of Mankewicz's "Citizen Kane" or Selznick's "Gone with the Wind," but it builds to a suspenseful, atmospheric and even darkly funny climax in the airplane hanger. The movie begins with "Auld Lang Syne" being sung at the end of the war and concludes with the same song, accompanying a pair of ghostly fliers in the haunted sky.
at June 13, 2012
Email ThisBlogThis!Share to TwitterShare to FacebookShare to Pinterest
Labels: "The Lost Squadron", 1932, Erich Von Stroheim, Herman Mankiewicz, Hugh Herbert, Joel McCrea, Mary Astor, Richard Dix, RKO Pictures, Robert Armstrong