"Platinum Blonde" and the Birth of "Cinderella Man" 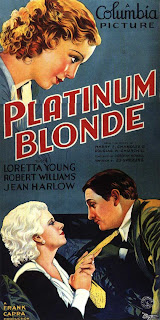 Give Frank Capra credit -- once the guy found a formula, he stuck with it. Specifically -- an honorable man, pure at heart, up against powerful and/or wealthy forces out to destroy or at least ostracize him. You can apply it to almost any Capra film, from "Mr. Smith Goes to Washington" to "Meet John Doe" to "It's a Wonderful Life" to "A Hole in the Head."

And this isn't meant as a criticism -- if the idea was a little familiar, Capra knew enough to work with writers who infused his scripts with lively, humorous dialogue. And Capra put the words in the mouths of some of Hollywood's best actors -- Gary Cooper, Barbara Stanwyck, James Stewart, Thomas Mitchell, Jean Arthur. And his own background as a gagman and director of comedies for folks like Harry Langdon didn't hurt, either.

Still, it is interesting to see the idea of the "Cinderella Man" and the phrase itself being introduced in Capra's 1931 film "Platinum Blonde."  Clearly it captured the public's imagination -- columnist Damon Runyon applied it to boxer James Braddock in 1935 (director Ron Howard used it as the title of his 2005 film about Braddock), and it pops up again in Capra's "Mr. Deeds Goes to Town" in 1936.

Anyway, back to "Platinum Blonde." The titular heroine of the 1931 film is Jean Harlow, who singleheadedly made the haircolor famous. She's Ann Schuyler of THE Schuylers, a high-society family whose blood is as blue as their noses. When the Schuyler son gets mixed up in a scandal with a chorus girl, Ann's path crosses that of reporter Stew Smith (Robert Williams). She takes a fancy to him and tries to sweet talk him into caving on the story. He doesn't do that -- he might be a goofoff and a drinker, but he's a dedicated newspaperman. But once the story is published, he does help her out:

A romance develops between Ann and Stew, and they get married. She almost immediately begins to try and change him, though he resists. All of this happens to the dismay of Stew's best "buddy" on the newspaper, Gallagher, played by an 18-year-old Loretta Young, already demonstrating her acting chops:

And speaking of acting chops, "Platinum Blonde" is a real showcase -- tragically, one of the only ones -- for Robert Williams. He'd done a fair amount of stage work before coming to Hollywood, including a long run in the Broadway hit "Abie's Irish Rose," but in this role he's a movie natural -- and sadly, he died of peritonitis just after this film was released. With his pipe, easy-going manner and hooded eyes, he's an early Bing Crosby. His rapport with Harlow is so obvious that they can get away with scenes like this, when she tries to make him wear garters:

Young is luminous as the girl who gets left behind, at least temporarily. And the cast includes old pros like Walter Catlett and Halliwell Hobbes. There aren't many other 1931 films that move with the style and assurance of "Platinum Blonde," made when Capra was hungry and still making a name for himself as a real-life Cinderella Man.

Here are the first few minutes of the movie: