"The Best Years of Our Lives": A Beginning 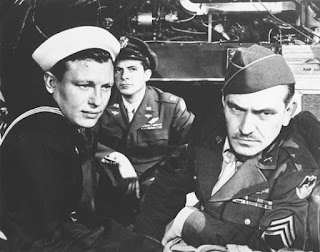 "The Best Years of Our Lives" opens and closes, roughly, at an airfield.

In the beginning, it's the point of re-entry for three World War II vets -- banker Al (Oscar-winner Fredric March), soda jerk turned bombardier Fred (Dana Andrews) and sailor Homer (Harold Russell), who has lost both of his hands and has become pretty adept with hooks. All three are coming home to Boone City, a midwestern metropolis not unlike Indianapolis or Cincinnati. And all three, for individual reasons, are scared stiff about reintroducing themselves to their loved ones and readjusting to civilian life.

The three of them have hitched a ride on an Army transport plane, taking a route back home that includes many stops along the way. This gives them time to share their stories, especially Homer, who is convinced that longtime girlfriend Wilma (Cathy O'Donnell) will leave him:

"The Best Years of Our Lives" is very much a product of its time -- that time being just after the allied victory in World War II, a victory that solidified America's position as a global power. At the same time, we came out of the war with a clearer understanding of the depths of evil and of how far we as a country still needed to go to ensure true equality for all of its citizens.

The film is ripe with the potential and the pitfalls of possibility -- of lives restarting, in the case of Al and his wife Milly (Myrna Loy); and of lives beginning, in the case of the forbidden romance of Fred, who is already married, and Al's daughter Peggy (Teresa Wright); and of Homer's difficult adjustment and gradual acceptance of the love of longtime girlfriend Wilma. 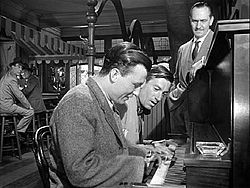 Director William Wyler handles each actor with delicacy and skill, but to me the most outstanding feature of "The Best Years of Our Lives" is the screenplay by Robert Sherwood, based on a story by MacKinlay Kantor. Sherwood's script contains some great, sharp-edged lines. One of my favorites is spoken by Al as he downheartedly prepares to return to the bank:

Another favorite scene is when Homer flees to the neighborhood tavern owned by his Uncle Butch after an uncomfortable re-entry with his family. Butch, beautifully played by songwriter Hoagy Carmichael, slowly plinks out "Up a Lazy River" on the piano (which Carmichael composed) and has a great little monologue.

Butch: Give 'em time, kid; they'll catch on. You know your folks'll get used to you, and you'll get used to them. Then everything'll settle down nicely. Unless we have another war. Then none of us have to worry because we'll all be blown to bits the first day. 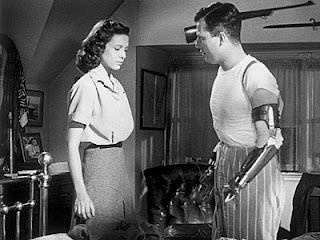 But it's the visual moments that give this movie its real staying power, from Homer's return home to the arrival of Al at his apartment, where he surprises Milly:

And, at the end of the film, back at the airfield, Fred's visit to an airplane graveyard to put to rest some ghosts of his own while his hard-drinking father reads his son's citations:

I've been a fan of older movies since I was a kid, but as I have aged I see "The Best Years of Our Lives" through different eyes. It's a tremendously moving yet down-to-earth movie, its simple nobility enhanced by Hugo Friedhofer's Oscar-winning score. The movie ends with the wedding of Homer and Wilma, and the impending marriage of Fred and Peggy and, to me, the sense of it being very early morning of a whole new day.
at June 05, 2012
Email ThisBlogThis!Share to TwitterShare to FacebookShare to Pinterest
Labels: "The Best Years of Our Lives", 1946, Dana Andrews, Fredric March, Harold Russell, Hoagy Carmichael, Myrna Loy, Robert Sherwood, Teresa Wright, William Wyler