Any movie that starts with Ginger Rogers singing "We're in the Money" in pig latin -- surrounded by chorus girls dressed in giant coins and little else -- is automatically a classic, but "Gold Diggers of 1933" is just getting started. Before it's all over, we'll also see the "Pettin' in the Park" number, which involves women stepping out of their step-ins and putting on tin suits, another number where chorus girls play neon violins and, finally, arguably the movies' first protest song, "Remember My Forgotten Man."


The man behind all this pre-code craziness was Busby Berkeley, who used his ribald imagination and startling camera angles to singlehandedly revive the movie musical, which had by 1932 fallen out of favor due to stilted staging and stodgy performances.

First came 1932's "42nd Street," where Berkeley choreographed a title number that included allusions to prostitution, lesbianism, rape and murder -- all acted out to the lyrics of a swell song! "42nd Street" was knowing, cynical, down and dirty, brazenly adult, and a huge hit. It even made a star out of the wan, winsome Ruby Keeler, despite her lack of acting skill and her leaden tap dancing.

The success of that film led to "Gold Diggers of 1933" and a series of wisecracking Warner Brothers urban musicals that flourished until the Production Code cracked down on naughtiness in the mid-1930s. Berkeley's sequences weren't just musical numbers -- they were little encapsulated plays, with the kind of massive spectacle that, in real life, would never fit on the stages where they're presented.

Like "42nd Street," "Gold Diggers of 1933" deals with the drama that occurs backstage at a Broadway show. This time around, the good-hearted showgirls are Keeler, Joan Blondell and Aline MacMahon. They're dealing with the depression with good humor and mock-toughness -- exactly the way the audience members imagined themselves dealing with it.

When Keller falls for Dick Powell, a songwriter who is actually a rich guy in disguise, Blondell and MacMahon try to outwit Powell's stuffy brother (Warren William) and his sidekick (Guy Kibbee), who don't want Powell in show business. They act like golddiggers, but their hearts are in the right place, and all ends happily -- even as the final number, "Remember My Forgotten Man," turns World War I soldiers into men waiting in a breadline. Here's the song, 1930s Warner Brothers style encapsulated: 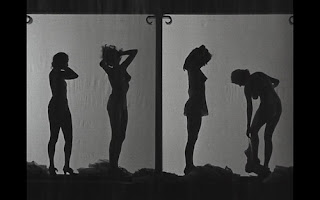 But for sheer Berkeley craziness, you can't beat "Pettin' in the Park," which features, in no particular order, an on-stage rainstorm, rollerskates, women undressing, tin suits, and lecherous midgets posing as babies:


Berkeley's fame didn't last long -- he became a victim of his own success, and couldn't keep producing musical numbers with the same imagination and verve. But for a few years, until the Production Code tamped down on risque stuff in 1934, he was hot stuff, and his visions were the gold standard for naughtiness until censorship standards began crumbling in the late 1950s.
at June 10, 2012
Email ThisBlogThis!Share to TwitterShare to FacebookShare to Pinterest
Labels: "Gold Diggers of 1933", "Remember My Forgotten Man", "We're in the Money", 1933, Busby Berkeley, Dick Powell, Ginger Rogers, Ruby Keeler, Warner Bros.