"Me and My Gal," or Law and Short Order 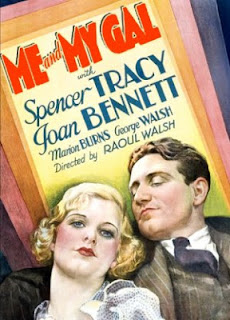 It's a showcase for a young Spencer Tracy, already relaxed and assured onscreen as police detective Danny Dolan. It's a showcase for an even younger Joan Bennett as his gal, a gum-chewing waitress named Helen who works at Ed's Chowder House on the waterfront. It has a criminal subplot that includes adultery and a break-in that will end up being reused in "Rififi." And smack dab in the middle of the movie, there's a quick parody of Eugene O'Neill's "Strange Interlude."

Despite all this, "Me and My Gal" is leisurely paced, spiced here and there with funny little set pieces, including a kind of Pete-and-Repeat patter that Danny indulges in with his John Candy-ish partner, played by Adrian Morris. Here's an example, from when the boys are called to break up a noisy wedding reception -- the bride is Bennett's sister:

The love story between Helen and Danny is spiced with slang, including "jake" and "bezark," a 1932 version of "dame." Then they drop their verbal sparring for a moment to poke fun at "Strange Interlude"; the movie version, with Clark Gable and Norma Shearer, was playing in theatres at the time. Danny calls it "Strange Innertube" and he and Helen ape the characters, whose unspoken thoughts are heard in voiceover:


In the crime subplot, Helen's sister Kate (Marion Burns) is having an affair with gangster Duke Castanega (George Walsh, brother of the movie's director, Raoul Walsh) and, even worse, is hiding him in the apartment she shares with her husband, a sailor who's out to sea in more ways than one. She also works in the bank that Duke's gang is breaking into and has given him information about which safe deposit boxes are most valuable. The gang, like the gang in "Rififi," breaks into the bank through the apartment above: 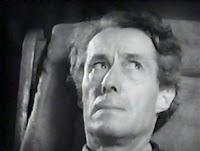 Meanwhile, back at Kate's place, her husband's father, Sarge (Henry B. Walthall, at right), sees everything that's going on, but he's paralyzed and mute. The only way he can communicate is by sending Morse code signals by blinking his eyes. Helen deciphers the code and finds out that Duke is in her sister's, ahem, attic. But to keep her sister out of trouble, she doesn't tell Danny about it:


Danny finds out, of course, and in the ensuing happy ending Duke is killed, Helen's sister's honor is restored and Sarge blinks happily.

It's interesting to see Tracy work here -- he manages to convey his character's intelligence even when Danny isn't acting all that smart. And Bennett's character is almost Lombard-ian with her guts and good humor. They're a nice match. And it's nice to see Walthall -- whose career included a leading role in "Birth of a Nation" in 1915 -- in a later role. He would appear with Tracy again in the 1935 film "Dante's Inferno."

Here are the full credits for "Me and My Gal."

at November 27, 2012
Email ThisBlogThis!Share to TwitterShare to FacebookShare to Pinterest
Labels: "Me and My Gal", 1932, Henry B. Walthall, Joan Bennett, Spencer Tracy