"Picture Snatcher," or Cagney and Racy

Whenever I talk about my love for old James Cagney movies, my kids remind me of this clip from "Family Guy": 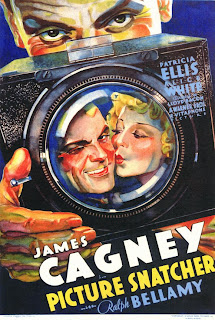 To them, those movies are little more than that -- people in out-of-style clothes speedtalking to each other. To me, they're fast-moving star vehicles with a streetwise style, sharp wit, just the right amount of cheerful cynicism and the strong presence of a pugnacious star with great physical style. Actually, in the 1930s, James Cagney was more than a star. His films ended up symbolizing the style of the Warner Bros. studio -- tough, unpretentious, good-naturedly brash.

The 1933 film "Picture Snatcher" combines two staples of the studio -- the gangster picture and the newspaper picture. (Actually, at Warner's there wasn't much difference between the two.) Cagney plays Danny Kean, who's just been released from Sing Sing. His old gang, led by Jerry (Ralf Harolde), is ready to welcome him back to the criminal fold, but Danny has other ideas. This is revealed when Danny's being measured for a new suit, and he tells the tailor not to leave room for the shoulder holster. Tailor: "You're gonna be the best-dressed goniff  (Yiddish for thief) in America."

No, Danny is going to go legit -- or at least legit enough to be a newspaper man. So he pays a call on editor McLean (Ralph Bellamy) at the Graphic-News, the sleaziest rag in town. McLean met Danny while he was in stir and told Danny to look him up, but he's reluctant to hire him because of his lack of experience.

Danny's chance comes as a result of a pre-code situation if ever there was one -- a firefighter ended up being called to a fire at his own apartment. He arrived to find his wife there, dead, in bed with another man. Danny's mission is to get past the fireman, who won't let any reporters into the apartment, and find a photo of the dead wife:

Danny then meets met Patricia (Patricia Ellis), a journalism student who's taking a tour of the newspaper. She likes him, but her dad (Robert Emmett O'Connor, forever playing a cop) is the flatfoot who put Danny behind bars. So they see each other on the sly. Meanwhile, another reporter, Allison (Alice White), also has eyes for Danny -- she even invites him to her apartment to play, um, ping pong. But she's also McLean's girl, and Danny is loyal to the guy who hired him.

Danny's next assignment is based on a real-life newspaper story -- in 1928, photographer Tom Howard, working for the New York Daily News, snapped photos of Ruth Snyder in the electric chair. Patricia's dad helps Danny get into an execution, where he does the same thing, in a scene that has echoes of "The Green Mile":

The cops and rival reporters find out what Danny did, and they give chase. He hightails it back to the newsroom:

Because of his death house escapade, Danny is in dutch with daddy, but he fixes that one by infiltrating his old gang, getting some great photos during a shootout, and then arranging it so that Patricia's father gets the credit for capturing Jerry. McLean goes to speak to Patricia on Danny's behalf while Allison pops up again:

The movie ends with a topical reference -- "Vas you dere, Sharlie" was the trademark phrase of radio comic Jack Pearl, at the peak of his popularity in 1933 as Baron Munchausen.