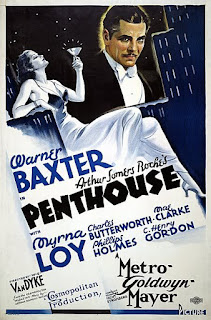 I bow to no one in my admiration for, and possibly creepy love of, Myrna Loy. That little pug-nosed, round-faced, level-headed, wry-humored vixen was sexy, smart and sweetly funny -- the perfect screen wife. Who cares that in real life she was married four times -- this is why movies are awesome!

Loy's true breakthrough role came in 1934's "The Thin Man," directed by W.S. Van Dyke and with a screenplay adapted by Frances Goodrich and Albert Hackett. Van Dyke, Hackett and Goodrich are also all on board for the 1933 film "Penthouse," so you have to wonder if Loy's performance in this film served as a kind of screen test for "The Thin Man."

In "Penthouse" Loy plays Gertie, a call girl whose roommate, Mimi (Mae Clarke), is shot in the first five minutes of the movie. Gertie wants to find the killer, and so does hotshot defense attorney Jack Durant (Warner Baxter). Durant's interest is personal -- Tom, the accused murderer, (Phillips Holmes) is in love with his ex-girlfriend Sue (Martha Sleeper, whose last name describes her performance), who has begged Durant to take the case. 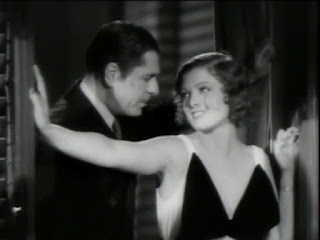 As the film opens, Durant has just won acquittal for his client, mobster Tony Gazzotti (Nat Pendleton). In this case, at least, Gazzotti was genuinely not guilty, so Durant is a hero. But not to girlfriend Sue. He shows up to greet her on Long Island in his best white flannels and a pimpin' hat, but she gives him the cold shoulder:

Durant goes on a drunk, and the next day he's debriefed on the previous night's events by loyal butler Layton (Charles Butterworth):

(Charles Butterworth should be every butler in every New York City apartment in every 1930s movie.)

Ex-girlfriend Sue then comes to Durant for help, because Tom has been accused of murdering Mimi, his old girlfriend. And Durant goes to work, with the help of Gertie. They've been introduced by Gazzotti, who adds "she's the kind you can take home to dinner, and no hard feelings if you don't stay for breakfast." Gertie is attracted to Durant, and she accompanies him to his apartment to spend the night -- her place, which she shared with the dead Mimi, gives her the heebie-jeebies. Gertie is ready for Durant to put the moves on her, and she's a little baffled when he doesn't.

Gertie: Say, are you still in love with someone, or are you just decent?

Durant: Maybe I think you're decent.

Gertie: A girl who comes into a man's apartment at night?

Durant: Well, you might have come here just to look at the Chrysler Building. 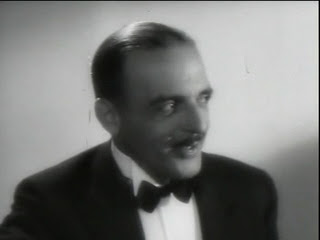 There are certain faces in 1930s movies that mean bad news from the get-go. For instance, never do business with C. Henry Gordon (aka evil Fred Astaire). Here he is mobster Crellimen, the man behind Mimi's murder. And as Gertie and Durant team up to nab Crellimen, Durant realizes he's falling in love with Gertie. This dawns on him in a scene where Baxter and Loy have a nice dialogue that echoes "The Thin Man":


Loy really does shine in this film -- at this stage in her career she was finally leaving behind the oriental temptress roles she played in movies like "Thirteen Women" and "The Mask of Fu Manchu" and within a few years she'd be the queen of the MGM lot -- after "The Thin Man" came such hits as "Libeled Lady" and "Test Pilot." She plays her role here simply and realistically, without the histrionics of Joan Crawford or the melancholy of Garbo.

Baxter doesn't fare quite as well -- even when he's playing a streetwise character like Durant, he can't shake his tendency toward leading-man pomposity. He looks especially uncomfortable during the romantic clinch in the final scene, when Loy musses his hair, and why any man should object to Myrna Loy mussing his hair is beyond me:


Here are the complete credits for "Penthouse," and a trailer: