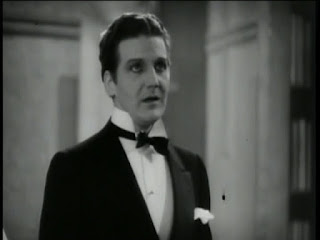 In vaudeville, Frank Fay was big.

He strolled onstage casually, with a slight swish, and then stood and told jokes -- a revolutionary concept for the time. No juggling, no slapstick, no mugging. He was known for his quick wit -- when he was heckled with a Bronx cheer, he responded, "Two of those made you, pal." As part of his act, he would break down the lyrics of "Tea for Two," interspersed with wisecracks. ("Nobody near us, to see us or hear us." "Who'd want to listen to a couple of people drinking tea?")

In 1929 Fay came to Hollywood with his young wife, Barbara Stanwyck. Sound films were in full swing and the studios wanted performers with stage experience. Stanwyck thought she might try her luck in pictures, too. The studios were making all-star revues to take advantage of sound and Fay appeared in the Warner Bros. entry, "The Show of Shows." He was the emcee, and the players included John Barrymore, Douglas Fairbanks Jr., Loretta Young and Myrna Loy. The movie was a hit, and Fay's screen success seemed assured. Yet within a few years he was out of Hollywood and back on Broadway, returning to films only sporadically. 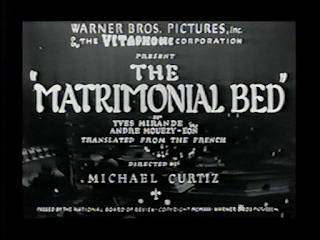 Fay's fizzle is even more mystifying when you see him in 1930's "The Matrimonial Bed." He's good! Despite years on the stage, he seems to understand how to modulate his performance for the screen. The film itself is a lightweight farce, very much like a filmed play, and Fay himself gives it heart and humor.

"The Matrimonial Bed" is set in Lubitsch land -- that non-existent neighborhood in Paris that is filled with rich, charming men and beautiful, indolent women. We open in an art deco home on the fifth anniversary of the death of the master, Adolphe Noblet. In a long expository dialogue, two maids converse about what's happened since -- Noblet's wife Juliette (Florence Eldredge) has remarried, to a stuffy fussbudget (James Gleason), and they have a young son. But everyone, especially Corinne the maid (Beryl Mercer), loved Noblet, who by all accounts was kind, loving and full of fun.

A portrait of Noblet dominates the mantle -- it has just been repaired and returned to its place after falling off the wall and getting torn. "Something," says Corinne, "always happens when pictures fall down without a reason."

Enter Leopold Traubel (Fay), a popular hairdresser (he's having affairs with at least two women) who's here to style Juliette's hair. No one in the house has ever seen him before, so you can imagine their surprise when he turns out to look just like Noblet. Juliette is particularly unnerved, especially when Leopold starts touching her in special places:

Two of Noblet's friends -- Dr. Friedland (Arthur Carew) and Chabonnais (James Bradbury Sr.) --  learn that Leopold has no memory beyond the last five years, and under hypnosis by the doctor Leopold remembers that he is Noblet.

What follows is traditional, somewhat labored farce. To keep Noblet from realizing that his wife has remarried, elaborate white lies connect Juliette's new husband with Juliette's friend Sylvaine (Lilyan Tashman), who's been having an affair with Leopold. But when she confronts him, he doesn't know who she is:

To make matters even more complicated, we're introduced to Suzanne (Vivian Oakland), who is Leopold's wife and the mother of his four sons -- two sets of twins. Noblet/Leopold finally learns the truth, and he also learns that Juliette is happier in her new life with a stuffy husband and young son. And he starts to realize that Suzanne isn't so bad, either:

So Noblet/Leopold conspires with his friend, the doctor -- the doctor will pretend to un-hypnotize Leopold so that he can return to his previous life and ensure Juliette's happiness. The doctor puts Noblet to sleep and he awakens as the more flamboyant Leopold:

It's a sweet ending, and Fay plays the humor as well as the wistful sadness.

Today if Fay is remembered at all, it's for a couple of reasons. One is that his turbulent marriage to Stanwyck, which ended in 1935, is said to have provided the inspiration for "A Star Is Born." Another is that in 1944, Fay scored a personal triumph as the first Elwood P. Dowd in "Harvey" on Broadway. He had a reputation as a drinker and a bit of a bastard, but he's also remembered for saving Stanwyck's fledgling movie career by helping convince Frank Capra to cast her in the 1930 film "Ladies of Leisure." And he influenced one of the best comics of the first half of the twentieth century -- Jack Benny freely admitted that he appropriate Fay's relaxed style and his swishy walk.

Who knows where the truth lies -- but the guy knew his stuff.

Here are the complete credits for "The Matrimonial Bed," and a preview: