"From Headquarters" and Even More Warner Regulars 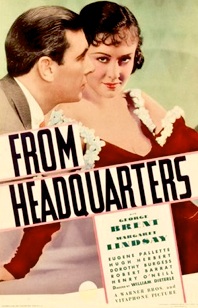 Like "Life Begins" and "Union Depot," the 1933 film "From Headquarters" is another slice-of-life panorama brought to you by Warner Bros. and filled with studio contract players.

The nominal hero of the movie is Warner stalwart George Brent, as a detective investigating the murder of a wealthy, decadent ne'er do well. The suspects include his old flame (Margaret Lindsay). But the real meat of the story lies in all the goings-on at a big city police station. The movie opens with a paddy wagon bringing in some "small fish," including one joker who, in a nicely played little seriocomic moment, ends up realizing that the joke's on him:


The contract players in "From Headquarters" include Hugh "Woo Woo" Herbert as a bail bondsman, Henry O'Neill as a chief inspector, Ken Murray as a wisecracking reporter and Eugene Pallette as a gravel-voiced (What else?) detective.

Then there is Edward Ellis as the murder-loving head of the crime lab. He demonstrates the scientific methods used to catch the culprit and has a few unorthodox moves of his own:


The bad guy is played by one of my favorite Warner contractees, Robert Barrat.

The versatile Barrat was all over the Warner lot in the early 1930s -- within a span of just a few months he played a gruff Communist-turned-capitalist in "Heroes for Sale," Barbara Stanwyck's drunk father in "Baby Face," Jimmy Cagney's editor in "Picture Snatcher" and patrician murder victim Archer Coe in "The Kennel Murder Case."

The only person who can place Barrat at the murder scene is a snitch played by Hobart Cavanaugh, and Barrat takes care of him in a broom closet:


Wait a minute -- "those fingerprints look familiar"? And they are so familiar that I can reach into this file of thousands of fingerprints and instantly pick who they belong to? Really, "From Headquarters"?

Anyway, Barrat tries to leave the police station after the murder, but the cops are a step ahead of him and they lock the doors. Barrat disposes of his murder weapon, a knife, by dropping it in a spittoon, but a sharp-eyed cop spots him and -- ugh -- digs it out. Case closed, old flame cleared, romance on again, players move on to next assignment.

Here are the full credits, and here's the "From Headquarters" trailer: