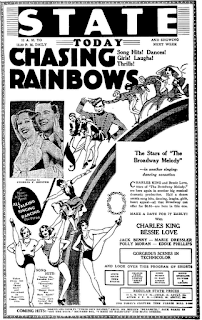 About midway through the 1930 film "Chasing Rainbows," Bessie Love -- as Carlie, one-half of a musical comedy team -- gets the news that the other half of the team, Terry (Charles King), has gotten engaged to someone else. Carlie has always loved Terry, and earlier that day Terry was finally feeling something for her, too, so now she feels like she's been hit in the gut.

To cover her emotion, Love plays this scene by crying like she's laughing, which is kind of sweet. And she plays it that way for more than 90 seconds, which is awkward:

But hey! That's life in show business, kid, and if you can't take the hard knocks then you won't be around for the soft knockers, or something like that.

"Chasing Rainbows" reunites Love and King of the 1929 hit "Broadway Melody" in another musical drama set behind the scenes of a show. This time around, they are appearing in a road show production of "Good-Bye Broadway," a show that includes the tune "Happy Days Are Here Again" two years before Franklin Roosevelt appropriated it as his campaign theme.

King's role is less sympathetic than it is in "Broadway Melody," where he can't bring himself to admit that he has fallen for the sister (Anita Page) of his longtime girlfriend (Love). Here, he's a bit of an oaf who's always chasing after -- and getting his heart broken by -- the female lead of the show, while good old Carlie makes his bed and folds his underwear. By the end of the movie, he finally realizes that Carlie is the girl for him, but you find yourself wondering how long it will be before he goes chasing after someone else.

And don't get me wrong -- despite her weird cry/laugh scene, Love is a pip, as they used to say. She's easily the most natural performer in the cast, which also includes Jack Benny -- two years before he would make his debut as a radio comic -- and Marie Dressler. 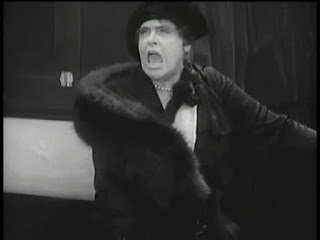 Both Benny and Dressler provide comic relief, but in vastly different ways. Benny already has his deadpan style in place and wouldn't make funny faces if his life depended on it. Dressler, on the other hand, can't even ask someone what time it is without crossing her eyes. Dressler's frequent co-star Polly Moran is in the cast as well, as a drunk wardrobe mistress.

The hefty Dressler is the butt, you should excuse the expression, of many jokes, such as when the cast hops a train to the next town:

Dressler: Who am I sleeping with tonight?

Benny: There'll be three in your compartment -- Carlie and you.

The true awkward acting honors, however, go to Nita Martan and Eddie Phillips. She plays the vamp who gets her claws into Terry -- she wants to marry him because his sister is married to a big Broadway producer. Phillips plays her smooth boyfriend. But their bad acting, especially in their scenes together, is anything but smooth:


Benny fares a little better -- one of his early radio writers, Al Boasberg, contributed dialogue to the movie. Benny plays the stage manager, and his speech to the cast near the end of the movie is similar to the kind of material he'd soon be doing on the radio: