"Ladies of Leisure," or Easel to Love 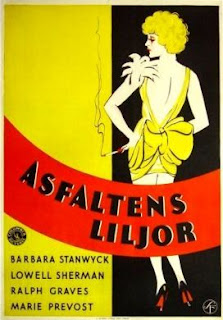 Barbara Stanwyck enters the 1930 film "Ladies of Leisure" -- and film history -- in a rowboat. The oars squeak. Her face is marked by mascara-streaked tears and she's clutching a broken dress strap. She's Kay, a party girl who just left a wild one on a yacht.

On shore is Ralph Graves as Jerry, who's also left a wild party, this one at his Manhattan penthouse. He's gone for a drive, but now he's fixing the flat tire on his Lincoln. Stanwyck climbs on shore, shivering.

Kay: How far is it to town?

Kay: There's only one town.

So Jerry gives her a ride back to Manhattan, where the night is obliterated by blinking neon signs selling Squibb's Dental Creme and Aeolian Player Piano Rolls -- but where Kay will eventually learn to see beyond them to the stars. 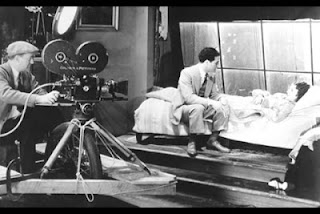 "Ladies of Leisure" isn't Stanwyck's first film, but it's the one that made her a star. It also marked the beginning of a five-picture collaboration with director Frank Capra (seen with Stanwyck at right) -- one that almost didn't happen. Capra wasn't impressed with Stanwyck at their first meeting, and she left upset. It wasn't until Capra was bawled out by Stanwyck's husband, comic Frank Fay, who urged Capra to watch an older Stanwyck screen test, that she was cast in the role.

Now back to the plot -- Jerry's an artist who's anything but starving. He lives high thanks to his family wealth -- dad runs a couple of railroads. On the ride back, Kay dozes off:

While she's asleep, Jerry sees something in Kay's face -- something that leads him to use her as a model for his new painting, "Hope."

"She had a mask on, like everybody else," Jerry tells his mother, "but underneath I think she had this."

The tricky part is getting down to it, and their first rocky sessions together show a bit of improvisation on Stanwyck's part:

Jerry knows that if Kay can get past her streetwise exterior, Hope will come through. But she's a tough nut to crack.

Jerry: It's like a man I knew once. He was suspicious, bitter, harsh, cruel. Those things were written in hs face like a map of his life. He died -- I saw him laid out. His face was a new face -- it was fine, noble. There was peace in it. He was himself again. Do you see what I mean?

Kay: No. All I get out of it is you gotta die to find yourself. Not me -- not for two dollars an hour.

Also hanging around is Jerry's upper crust fiancee (Juliette Compton). She's cool and controlling -- we know she isn't right for our hero because she calls him "Jeddy." Marie Prevost is around for comic relief as Kay's roommate and best friend. And then there's Jerry's boozy friend Bill Standish, played by the ever-welcome Lowell Sherman. He and Stanwyck are perfectly matched in the wisecrack department:

Bill: Congratulations, so am I.

Of course, Jerry eventually gets through to Kay and she lets down her defenses and becomes a perfect model. They also fall in love, in a scene that echoes the moment in Capra's "It's a Wonderful Life" when George Bailey (James Stewart) realizes in a mixture of anger and awe that he loves Mary Hatch (Donna Reed):

The Jerry-Kay relationship upsets Jerry's wealthy parents, and there's a father-son standoff. Jerry's mother (Nance O'Neil) visits Kay and tries to get her to break up with Jerry for his own sake, and in return mom gets the full Stanwyck:

Capra writes in his autobiography that, if she was filming an emotional scene, Stanwyck left everything on the field in the first take. And in this performance, so early in her career, she already has the ability to combine outer toughness with a sudden inner vulnerability that can tear your heart out. Sherman and Prevost perform like the pros they are. Graves, who was already a star thanks to his roles in the Capra-directed action pictures "Flight" and "Submarine," has a tough time impersonating someone with artistic temperament.

Here are the complete credits for "Ladies of Leisure."