The 1932 film "Red Dust" is ironically titled -- dust has very little to do with what happens in the movie. Moisture, however, plays a starring role -- moisture in the form of sweat, rain, steam and humidity, with a very special appearance by Jean Harlow's bathwater.

Set on a rubber plantation in Indochina, with the nearest large city being Saigon (they pronounced it "say-gone" in those days), "Red Dust" deals with Denny (Clark Gable), a rough-and-tumble plantation boss who's torn between two women -- earthy goodtime girl Vantine (Jean Harlow) and icy yet smouldering Babs (Mary Astor). The three of them face one crisis after another -- windstorms! Rainstorms! Tigers! Fever! The Chinese cook's bad teeth! 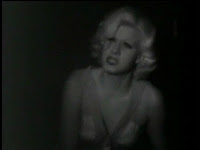 Vantine appears first -- we see her in bed, where she has gone to sleep and hide from a drunken worker (Donald Crisp), and she's illuminated by Denny's flashlight. This happens on a steamy night when Denny just happens to be in a bad mood -- he's on one of his periodic rants to the wizened McQuarg (Tully Marshall) about how he'd love to leave the whole grueling business: "Swallowing dust one month, wading in mud the next -- just so some old woman can take a hot water bottle to bed with her."

Vantine has taken the boat (On water!) to the plantation to hide out from the authorities. She doesn't say why she's in trouble, but from her appearance and filmy wardrobe we can guess.

Vantine: What else do you do around here besides work? Know any games?

Then she tries to strike up a conversation with Denny:

In a nice touch that Howard Hawks would steal -- er, adopt -- in "To Have and Have Not," Denny and Vantine make up different names for each other. She calls him Fred, and he calls her Lily. And they end up playing other games together, if you know what I mean, and I think you do.

Both Harlow and Gable are surprisingly assured in their roles -- even more so for Harlow. Her star was still on the rise and it was during the making of this film that her husband, MGM executive Paul Bern, committed suicide. But Harlow gets all the film's best lines and knocks them out of the park -- for instance, while cleaning a bird cage, she asks the occupant, "Whaddya been eating? Cement?"

Fast forward a few weeks, and Vantine is ready to board the boat back to civilization. Arriving on that very same boat is Willis, the plantation's new surveyor (Gene Raymond), and his wife, Babs.

You can tell that the Willises aren't quite prepared for the rugged conditions they find -- they've packed tennis rackets, and when she sees the plantation headquarters, Babs asks where the main house is. On top of everything else, Willis has a tropical fever and he spends the next week or so sweating like crazy. Denny nurses Willis through his fever, and earns the gratitude of Babs. He likes that -- he likes her. Meanwhile, Vantine's back -- the boat has had mechanical trouble.

So there's a full house, and once Willis has recovered, Denny sends him on several long-distance missions so that he can make a play for Babs. He takes her on a tour of the plantation, and they get caught in a downpour, which has a way of breaking down, um, formalities:


Vantine can't figure out why Denny goes for a cool customer like Babs. But she just goes her own merry way while she's waiting for the boat to be repaired. This includes using the camp water supply as a bathtub, with Denny as a flustered observer -- not flustered for his sake, but for Babs's sake, for God's sake:

(By the way -- when Harlow basically played herself in the great 1933 Hollywood satire "Bombshell," there's a scene when her character, Lola Burns, has to do "Red Dust" retakes in the bath barrel.)

Despite Denny's infatuation, it's pretty clear that Babs isn't right for him. Unlike Vantine, she calls him "Dennis" and wouldn't think of joking around or pitching a double entendre. And when Denny goes to visit Willis in a remote location, he finally understands how much the guy loves his wife and how out of place Babs would be on a rubber plantation. (Babs, in fact, is the film's only sweat-free character, making her seem even less human.)

So Denny gets noble and comes back to break up with Babs. She doesn't take it well, and she has a gun, so Denny gets shot. Then Willis arrives, and Vantine steps in:

For them, the plantation is home, sweat home.

Here are full credits for "Red Dust," and a trailer: