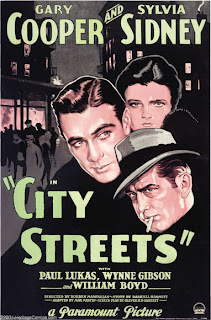 The 1931 film "City Streets" is blessed visually in several ways. One is by the smooth, innovative direction of Rouben Mamoulian, who in this film introduces one storytelling technique that today's movies are still using. Another is the atmospheric photography by Lee Garmes, who also shot "Scarface," "Gone with the Wind" and "Nightmare Alley." And then there's the presence of a tall, handsome drink of water named Gary Cooper.

Cooper plays a character called simply "the Kid" -- a straight shooter who also happens to be a crack shot. At this point, Cooper was also a legendary ladies man, with a line of conquests that included Clara Bow and Lupe Velez, and it's easy to see why -- aside from his physical attractiveness, he radiates strength and confidence.

Born Frank Cooper in Montana, our hero took up horseback riding as a kind of physical therapy to recuperate from a hip injury he suffered in a car accident. This made him a natural for western roles, such as in "The Virginian" and "The Man From Wyoming," but his cowboy's nonchalance wasn't restricted to the range -- for instance, as a Foreign Legionnaire taken by Marlene Dietrich in "Morocco," he might as well be wearing chaps.

"City Streets" begins with the Kid working at a carnival, where he runs the shooting gallery and amazes the spectators with his trick gun work. His best girl is Nan (Sylvia Sidney). She's a good kid with just one fault -- she's loyal to her nogoodnik stepfather (Guy Kibbee), who works as a "bodyguard" for bootlegger Big Fella (Paul Lukas).

Big Fella's catchphrase is "no hard feelings," which is gangster-speak for "very hard feelings indeed, and you will be riddled with bullets as soon as I can step out of the way." We first get a look at Big Fella as he's collecting protection money from a reluctant client:


I think we all know the moral to this story: never get your hat personalized.

Nan and the Kid want to get married, but they can't on his gallery salary. She tries to talk him into joining Big Fella's gang, but he's reluctant. Then when Big Fella's main rival is killed with stepfather's gun, Nan's loyalty is put to the test. She's found guilty of withholding evidence and is sent to prison. While there, she sours on the mob and is grateful that the Kid isn't mixed up in it. But he is. He tells her the news during a prison visit, and later that night it's still rattling around in her head:

Once Nan is released from stir, she wants to pry the Kid loose from Big Fella's clutches. But Big Fella is more interested in getting his clutches around Nan. The Kid and Big Fella have a showdown over Nan, and Big Fella decides its time to rub out the Kid. But Nan pretends to be interested in Big Fella in order to save the Kid's life. Then one of Big Fella's old girlfriends (Wynne Gibson) shoots him and frames Nan. Everybody wants to nab Nan, but the Kid takes control of the mob in this skillfully edited scene:


"City Streets" is based on a Dashiell Hammett story and adapted by Max Marcin, the man behind the "Crime Doctor" radio and film series of the 1930s and '40s. It has the narrative drive you'd expect from a Warner Bros. gangster movie with the European visual flair of a Paramount film. That style flows all the way through to the final scene -- the Kid and Nan have escaped from the mob and crank up Wagner on the car radio as the camera pans up to birds circling in the sky.