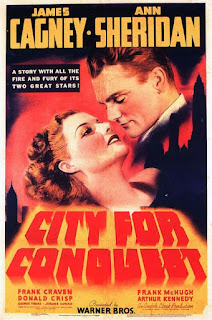 By the time "City for Conquest" was released in 1940, James Cagney had been one of the top stars at Warner Bros. for ten years. The movies that put him in that position -- tough, fast-moving urban dramas with lots of action and snappy dialogue -- were so successful financially, artistically and culturally that they came to symbolize the studio's style during the 1930s.

In a way, "City for Conquest" is the last Cagney picture of that type. It's an elegy for those movies, usually set in New York City, with Cagney as a working-class Irishman named Danny, Eddie or Tommy who fights passionately for what he believes in, regardless of what side of the legal fence he's on. 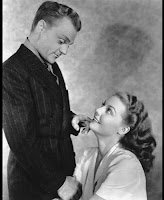 In this movie, Cagney is in the unique position of being a kind of hero and elder statesman at the same time. There's crime in the picture, but unlike in the old days, he doesn't get directly mixed up in it. He's showing his age slightly -- his teaming with Ann Sheridan as his romantic interest, who's supposed to be the same age (there's a 15-year difference), is a little off. But in many ways, "City for Conquest" is the quintessential Cagney performance, combining his natural pugnaciousness and physical style with low-key drama and naturally played sentiment.

We begin in the city's Lower East Side, of course, led there by a philosophical and slightly annoying tramp (Frank Craven) who's supposed to symbolize the unbreakable spirit of New York. This part would seem a natural for Craven, who played a similar role, the omniscient stage manager, in the Broadway production of "Our Town." It isn't that it's a bad performance -- it's just that the character is more of a dramatic conceit than a person, and Craven has to make his way through purple pronouncements about the city like this: "Look at it! Seven million people fighting, fighting, clawing away to get one foot on a ladder that'll take em to a penthouse." See for yourself:

Then we fast forward a few years -- Danny is driving a dump truck and boxing for relaxation. Eddie is giving piano lessons and still dreaming of that symphony, which he describes in phrases that might as well be spoken by our verbose tramp friend: "It's the city, with all of its proud, passionate beauty and all of its sordid ugliness ... of its teeming seven millions and its barren loneliness."

Meanwhile, Peggy's dream of dancing is given life by the smooth, arrogant Murray (Anthony Quinn in his days as the second-string Cesar Romero), and they become a team. Danny's happy for her success -- she's always gonna be his goil, no matter what -- but when Murray starts bad-mouthing Peggy and her friends, Danny gets hot:


Despite his skill in the ring, and despite the entreaties of his buddy Mutt (longtime Cagney sidekick Frank McHugh) Danny's always been resistant to a boxing career. Then, when Eddie loses his music scholarship and Peggy tells him of her dreams of being upwardly mobile, Danny realizes he's going to need some extra kale. So he signs with kindhearted fight promoter Scotty MacPherson (Donald Crisp) and starts making the boxing circuit at the same time that Murray and Peggy start making the vaudeville circuit. We learn this in one of those great Warner montages:


About this time, we're introduced to a character who's a lot like the characters Cagney used to play -- Oogie, a pal from the old neighborhood (director Elia Kazan in an early role). Oogie's back from a stretch in the pen, and Danny stakes him to a meal and a new pair of shoes. As Danny rises in the fight game, Oogie's star is rising, too, most likely through nefarious means.

Then comes heartbreak -- Peggy leaves Danny for a nightclub tour, and a heartbroken Danny starts fighting outside his class out of anger and spite. This leads to a championship match where the opponent plays dirty by rubbing rosin dust in Danny's eyes, causing him to lose his sight. For the rest of the movie Cagney plays his role with a squint -- and he's one of the few guys who can make a squint look heroic. Oogie takes it upon himself to avenge Danny, and ends up eating lead on the waterfront. You can almost hear him say "I ain't so tough" a la Cagney in "The Public Enemy."

At the movie's climax, only Eddie has achieved his dream -- to conduct his symphony at Carnegie Hall. Danny listens on the radio, from his newsstand in Times Square:

You might call this ending over the top -- I would, but I think it's bad form to poke fun at a scene that brings tears to your eyes.

One of the best parts of Jack Benny's radio show were parodies of current movies, and "City for Conquest" did not escape scrutiny. By this point in Benny's career, he was the country's most popular radio comic and the regular cast that would be with him for decades was firmly in place -- jovial announcer Don Wilson; comic foil Mary Livingstone (Benny's real-life wife); vain, boozing bandleader Phil Harris and naive singer Dennis Day.

This is during the period when Benny's show, written by Bill Morrow and Ed Beloin, hadn't quite fallen into its postwar sitcom phase -- there is an opening about Jack putting his footprints at Grauman's Chinese Theatre, with Benny exhibiting the same kind of false modesty as Anne Hathaway accepting a Golden Globe for "Les Miserables."

The "City for Conquest" sketch is short, concentrating mainly on the boxer plot. Targets include the film's overblown "poetry" and Eddie's musical aspirations (Phil Harris plays Eddie, who is composing his symphony on a drum set instead of a piano. His solution for the big finish: more cowbell.) There's also fun poked at Cagney's Lower East Side patois:

Benny (as Cagney, to Mary): Is that a new skoit?

Mary (as Sheridan): Yeah. Is that a new shoit?

Benny: Yes, it's a new shoit. How do you like my shoit?

Mary: It's a little short around Detroit.

Here are the credits for "City for Conquest," and a trailer: