All right, so he's not Daniel Day-Lewis.

Nonetheless, Cawthorn had one particular character type down cold -- the cranky-but-harmless, usually wealthy, Dutch-German businessman who said things like "You vill pay me der seventy dollahs or I vill know der reason vy!"

He vas good at it.

Cawthorn started on the stage as a child, and in a 1908 Broadway show he supposedly created an animal called the whiffenpoof while ad libbing. Some fellows from Yale were in the audience and created a song to go with the name. Thus Cawthorn is only a few degrees separated from Cary Grant, who sang "The Whiffenpoof Song" in the film "Monkey Business"!

He didn't always play to type -- Cawthorn appeared in the 1929 version of "Taming of the Shrew" with Mary Pickford and Douglas Fairbanks, and he was the doctor who can't understand Jeannette MacDonald's need for male, um, companionship in the 1932 film "Love Me Tonight." 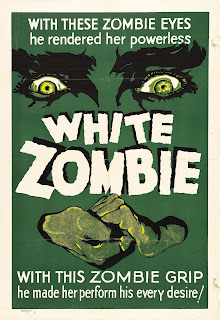 In "White Zombie," released the same year and as far from "Love Me Tonight" as we are from Pluto, Cawthorn plays slightly off type as Dr. Bruner, a missionary. Dr. Bruner has been in the missionary position in Haiti for over 30 years, and boy are his hips tired. He has been called to a plantation to perform a marriage ceremony for two visitors, Neil and Madeline (John Harron and Madge Bellamy). But the evil plantation owner (Robert Frazer) wants Madeline to himself, so he visits witch doctor-zombie master-golf pro "Murder" Legendre (Bela Lugosi) for advice.

"Murder" has two distinguishing characteristics -- he is always followed around by a vulture and he has a bad hairpiece. The evil plantation owner gives the bride some zombie formula, and on her wedding night she puts a serious crimp in the honeymoon by turning cold and stiff, although to some grooms that might be the perfect aphrodisiac.

Neil thinks that Madeline is dead, and he goes to Dr. Bruner for help. Bruner says, "You vill pay me der seventy dollahs" -- no, sorry, wrong movie. Instead, in a very long take, Bruner laboriously explains to Neil that Madeline has become zombified:

The grieving groom teams with Dr. Bruner and they set out for the castle of "Murder" and his army of obedient zombies. Cawthorn is third-billed in this movie, and in the big showdown he saves Neil and Madeline by telling the zombies to take a long walk on a short cliff:

"White Zombie" is visually striking, but the script is routine and humorless. There's only one joke in the movie, and Cawthorn gets it -- he's always asking someone for a match to light his pipe. While you collapse with hilarity, we move on to Cawthorn movie #2, in which he plays a more Joseph Cawthorn-ish role. 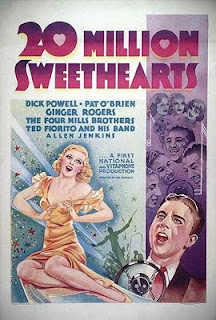 In the 1934 film "Twenty Million Sweethearts," Cawthorn is Mr. Brokman, the head of the Carlotta Soap Company. The company sponsors a radio show with crooner Buddy Clayton (Dick Powell), who was discovered by fast-talking talent scout Rush Blake (Pat O'Brien). We first see Cawthorn when he's passing on suggestions of songs for Buddy to sing:

As for Cawthorn, his last film was "The Postman Didn't Ring," released in 1942.

Here are credits for "White Zombie," and a trailer:


Here are credits for "Twenty Million Sweethearts," and a trailer: