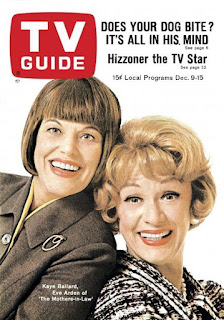 "The Mothers-in-Law" could also have been titled "Lucy and Ethel's Children Get Married, Move Into the Garage and Have a Baby," but that's a terrible title.

It is, however, a kind-of-succinct description of this forgotten sitcom, which ran on NBC from 1967-69.

The title roles were played by Eve Arden and Kaye Ballard as, respectively, Eve Hubbard and Kaye Buell, longtime next-door neighbors and Lucy and Ethel-like friends who become even closer when Jerry Hubbard (Jerry Fogel) marries Suzie Buell (Deborah Walley, who unlike everyone else, didn't get to be called by her real name on the show). Herbert Rudley played Eve's husband Herb, and Roger C. Carmel played Kaye's husband, Roger C.

The executive producer of "The Mothers-in-Law" was Desi Arnaz, heralded before each episode by a "Desi Arnaz Presents" title. Long divorced from Lucille Ball by this point, Arnaz was also experiencing a career fade. Ten years earlier, he was regarded as the man behind the redhead, the one who helped make their TV production company, Desilu, one of the most successful in Hollywood. Now he needed to bounce back, and "The Mothers-in-Law" was his best shot.

The show was created by two longtime "I Love Lucy" writers -- Madelyn Pugh Davis and Bob Carroll, Jr. -- and the scripts were full of Lucy and Ethel-type misadventures. (Example: While the newlyweds are away, Eve and Kaye sneak into the garage to nose around the place, but get locked in, and hide in the shower when the couple returns.)

For the mothers-in-law, Arnaz turned to Arden and Ann Sothern, both of whom were long associated with Desilu -- Arden with the TV series "Our Miss Brooks" and Sothern with the TV series "Private Secretary." (Arden and Lucille Ball had also appeared together in the 1937 film "Stage Door.") Sothern didn't work out -- Ballard, to that point known more as a nightclub comic and impressionist, was much more of a comic contrast. Eve Hubbard was a rather stuffy WASP matron, while Kaye Buell was hot-blooded and Italian.

Arnaz sold the show to Procter & Gamble. This was back when advertisers still bought entire blocks of time on the TV schedule, and P&G was the long-time owner of a Sunday night half-hour on NBC right between "Walt Disney's Wonderful World of Color" and "Bonanza," two of the tube's most popular shows.

"Bonanza" finished the 1967-68 season in a three-way tie for fourth place; "Disney" finished at 25th place. "The Mothers-in-Law" finished in 37th place -- it appeared that after watching "Disney," most of America turned away from "The Mothers-in-Law" and to CBS to catch the last half-hour of "The Ed Sullivan Show" before stampeding back to NBC and "Bonanza." This happened even though Arnaz appeared on a couple of episodes as a performer -- with Desi Arnaz Jr. accompanying him on drums.

NBC was unhappy with the show's ratings and considered cancelling it, but P&G wanted to keep it on the air -- it was selling lots of Ice-Blue Secret deodorant! They threatened to move the show to ABC, so NBC gave in and kept it on the schedule. (For the second season, Richard Deacon replaced Roger C. Carmel as Kaye's husband when Carmel left in a pay dispute. The character's name remained Roger C.)

In the second season's first episode, Kaye's grandmother visits from Italy. She is under the impression that Jerry and Suzie-Deborah are still unmarried, so they agree to "get married" while great-grandma is there, even though they've been hitched for a year. Then right in the middle of the ceremony, Suzie-Deborah gets the news -- she's pregnant -- and great-grandma dies of a heart attack. (I may have made up that last part.)

The birth of twins in early 1969 -- Joey and Hildy -- didn't help the ratings. (What's wrong with you people?!) "The Mothers-in-Law" finished the 1968-69 season in 40th place. P&G found a new timeslot tenant for the following fall -- Bill Cosby. And Desi Arnaz? Aside from a few unsold pilots, "The Mothers-in-Law" was his last project behind the cameras. In front of the cameras, he still made appearances on talk and variety shows, and in 1976 he hosted an episode of "Saturday Night Live" that ended with a conga line in the studio. He died in 1986.