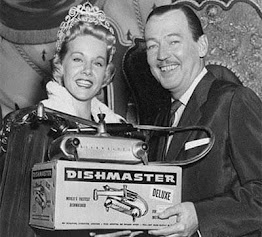 On Wednesday, January 28, 1948, the Mutual Network radio show "Queen for a Day" came to Louisville for a live broadcast, setting up shop in what is now Louisville Gardens for a broadcast over station WGRC, which later became WAKY.

On each episode, several women with hard-luck stories competed to be chosen as "Queen" and receive tons of prizes from emcee Jack Bailey, seen at right holding a highly coveted -- Dishmaster Deluxe? Anyway, I'll let the article from Variety tell the rest of the Louisville story:

at February 09, 2022
Email ThisBlogThis!Share to TwitterShare to FacebookShare to Pinterest
Labels: "Queen for a Day", Stuff I Read in Variety Back Issues