"They Learned About Women," and Vaudeville

"They Learned About Women" was released in 1930, early enough in the evolution of talking pictures that silent film-style title cards were still used to introduce scenes -- and the leading men, who are supposed to be major league baseball players, are wearing eyeliner. But it's important because it's the only full-length film made by the team of Gus Van and Joseph Schenck -- Schenck died just after the movie was released. 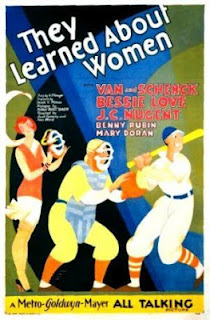 The guys were gigantic in vaudeville -- they were a part of the Ziegfeld Follies from 1918-21 -- and their repertoire included songs like "She Knows Her Onions," "Away Down South in Heaven" and the quizzically titled "If You Want to Miss a Heaven on Earth, Stay Out of the South."

In the movie, Van and Schenck are Jerry and Jack, two guys who play baseball for the Blue Sox by day (no night games back then) and play in vaudeville at night. Their performing style was simple -- Van sang bass and Schenck harmonized on tenor while playing piano.  They did a lot of good-humored ethnic comedy numbers, usually poking fun at the Irish and Jews, such as "Dougherty Is the Name":

What plot there is to "They Learned About Women" involves a love story between Jack and Mary (Bessie Love), who are driven apart by the manipulative Daisy (Mary Doran). As if that isn't enough, the hussy also tries to split up Jerry and Jack!

In between there are several musical numbers that take place in the theatre and on the field -- although staging "Shake That Thing" in the team shower probably isn't the best choice. There's also comedy relief from Tom Dugan and Benny Rubin. Dugan would go on to play Hitler in several World War II-era movies, including Ernst Lubitsch's "To Be or Not to Be," and Rubin would become a popular comic second banana for everyone from Jack Benny to the Three Stooges. Their Irish-Jewish interplay actually echoes Van and Schenck's routine -- and as an added bonus, Dugan's character stutters.

During the early talkie era, Bessie Love was one of the busiest actresses at MGM, with a fresh, charming quality. Here's her big number in the picture, performed live on the set as far as I can tell: