"A Free Soul," or Shearer Madness

The climax of the 1931 film "A Free Soul" is a fourteen-minute continuous take -- a courtroom scene where Lionel Barrymore, as alcoholic attorney Stephen Ashe, back from a months-long bender, uses his last breath to argue that his daughter's fiance, accused of murder, committed the act while temporarily insane and should therefore be found not guilty. Barrymore won the Oscar largely as a result of this scene, but what makes "A Free Soul" even more interesting is the contrast in acting between the stage-trained style of Barrymore and the more natural, earthy style of a young Clark Gable.

"A Free Soul" is based on a 1927 novel by journalist-screenwriter Adela Rogers St. Johns, whose father, Earl Rogers, was a well-known defense attorney in Los Angeles. The heart of the story lies in the bond between Stephen Ashe and daughter Jan (Norma Shearer). Both are proudly independent spirits -- Stephen, despite his success as an attorney, is the shame of his well-to-do family because of his seedy clientele and his drinking; Jan is a romantic, strong-willed free spirit who keeps refusing to marry polo star Dwight Winthrop (Leslie Howard), who's been chasing her for years.

When Jan accompanies her father to court, she meets his latest defendant -- it's Gable as gambler Ace Wilfong -- capital W, small i, small l, small f, small o, small n, small g. (Apologies to W.C. Fields.) Anyway, Jan is struck with the big hunk of bacon, and he with her: 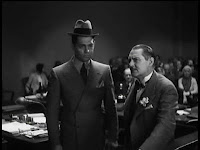 Ace is accused of murder, and in court, Stephen has him try on a hat found at the murder scene with the initials A.W. inside. It sits atop his head like a cherry on a sundae, and since it doesn't fit, they must acquit.

That night, Stephen celebrates by tying one on with Ace, and the two men visit the Ashe ancestral home, where everyone but Jan gives them the cold shoulder.


So Jan and Ace go for a drive:

(The lesson here is that there is no movie scene that cannot be improved by the addition of Ruh-ruh-ruh-Roscoe Ates.)

Jan and Ace begin an affair that's little more than an addictive thrill for her, but that is downright serious to him -- so serious that he asks Stephen an important question:

That scene vividly illustrates the difference in movie acting styles between the two men -- Barrymore chews the scenery, but Gable doesn't have to. He just sits back, exuding power and sexuality while barely moving a muscle.

Desperate to help her father kick the bottle, Jan promises never to see Ace again if dad will get on the wagon. It works for a few months. Then dad's off the wagon again and Jan's on Ace. But this time Ace is determined to marry Jan, and gets nasty about it. After she receives a threatening drunken visit from Ace, Dwight pays him a visit:

This leads us to the big showdown in the courtroom, where Stephen has recovered, just barely, from months of drunkenness. He tries to exonerate Dwight while once and for all publicly incriminating himself:

The bond between father and daughter, and the easy banter between Shearer and Barrymore, is what makes "A Free Soul" believable despite lapses into overacting (see right). This is Shearer before she became the dowager Queen of MGM in the later 1930s, giving nobler-than-noble performances in "Marie Antoinette" and "The Women." Here she's still a little sexpot, reminding us that she did, after all, pose nude when she was a Ziegfeld showgirl. Barrymore's performance is bombastic, but shaded with affection for his daughter, and in the scene where he and Shearer swear off their respective addictions you can see that tenderness as well as the fear in their eyes:

Here are the complete credits for "A Free Soul."