October 27, 2012
In the 1932 film "The Match King," Warren William has a clandestine meeting with his lover, played by Glenda Farrell. Object: money transfer. 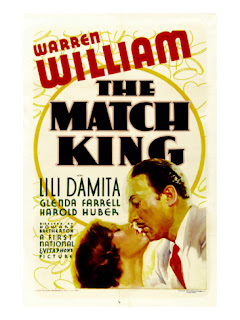 The evidence is right before your eyes, ladies and gentlemen -- even Glenda Farrell, the woman who played hard-boiled dames in dozens of Warner Bros. movies, falls under the spell of Warren William when he is in full douchebag mode!

Little wonder, then, that for the first half of the 1930s, Warren William was your go-to guy for douchebags, whether they were shyster attorneys ("The Mouthpiece"), bogus doctors ("Bedside"), phony mentalists ("The Mind Reader"), lascivious bosses ("Employees' Entrance") or crafty campaign managers ("The Dark Horse").

In "The Match King," William's character is based on a real-life douchebag -- Ivar Kreuger, a swindler who built a financial empire on matchsticks before committing suicide. Kreuger's initial construction business was called Kreuger and Toll, and the scriptwriters combine those names to give us William's character, Paul Kroll.

Kroll is a small-time chiseler who's working as a street sweeper in Chicago when his relatives in Sweden ask him to visit. He's bragged to them about his non-existent wealth and success and they want him to help save the family match company. Kroll's advice is to be aggressive -- to start buying up rival match companies and create a monopoly.

Only one family member is aware of Kroll's real background -- his cousin Erik (Hardie Albright). But Kroll convinces him of his plan by delivering what would become a staple in these movies -- the speech letting us know that William's character may be a douchebag, but he is a visionary douchebag:

Through his wheeling and dealing, Kroll ends up controlling a match monopoly that is practically worldwide, but you can't make an omelet without breaking some eggs. He cheats investors and builds an empire on debt. And when an eccentric chemist invents a non-disposable match that lights repeatedly, Kroll has the man committed. On the other hand, to show us that the guy does have a heart, he woos and loses a fickle actress (Lili Damita).

Then comes the stock market crash of 1929, and to keep the empire afloat Kroll buys counterfeit bonds from a forger (Harold Huber). Then Kroll offers to give the forger a lift in his boat:

In Paris, Kroll realizes that the jig, she is up. The bonds are discovered to be fake, and he is confronted by his investors. He steps onto a balcony, where all his misdeeds conveniently rattle through his head:

In "Skyscraper Souls," made the same year, William is financier David Dwight, who has just built an edifice even taller than the Empire State Building. But, like Kroll, he has built his empire on debt. And his misdeeds aren't all financial -- he's creeping a young secretary (Maureen O'Sullivan) while his loyal woman Friday (Verree Teasdale) is waiting for him to get a divorce from his absentee wife (Hedda Hopper in her pre-gossip columnist days). But Dwight doesn't want to divorce his wife -- it's easier to keep giving her checks and staying "free" to wander.

There are also a lot of subplots in "Skyscraper Souls," including a love story between a tender-hearted jeweler (Jean Hersholt) and a prostitute (Anita Page) and a love story between O'Sullivan and Norman Foster as a bank teller. And Dwight's scheme with another investor to take control of the building by running up the bank stock and then selling it short affects almost all the cast, including Gregory Ratoff as a dress merchant and Wallace Ford as a radio announcer.

But "Skyscraper Souls" revolves around Dwight, and here's the obligatory douchebag-with-vision speech:

Funny how that speech also applies to today's friction between the 1% and everyone else, isn't it?

The douchebag's comeuppance in this case comes when he is ready to skip the country with O'Sullivan in tow. Teasdale, as his longtime companion, has taken O'Sullivan under her wing and she won't stand for it because she doesn't want Dwight to ruin someone else's life:

By wiping her prints from the pistol, William's character demonstrates his good side once again. But there is more tragedy ahead:


With the advent of the production code in 1935, William started being cast as good guys, often detectives. He played Perry Mason in several films and played the Lone Wolf, aka Michael Lanyard, in a series of films into the 1940s. So William left his douchebag days behind. But they were fun while they lasted.